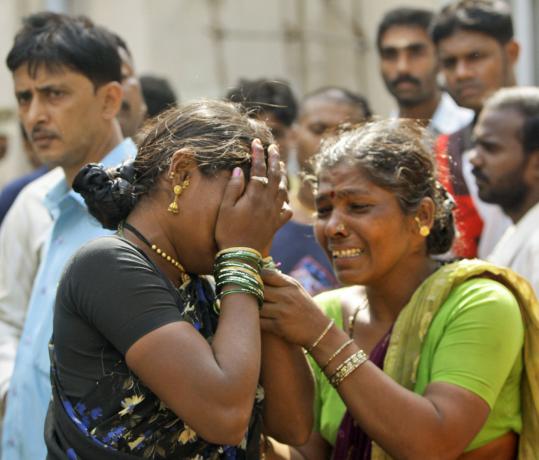 A woman grieved yesterday for her two children while waiting for their bodies in Mumbai. (Gurinder Osan/Associated Press)
By Mark Magnier and Sebastian Rotella Los Angeles Times / November 28, 2008
Text size – +

MUMBAI, India - Indian security forces assaulted a Jewish center in Mumbai where Muslim militants were believed holed up with possible hostages early today, after a chaotic day of gunfire and explosions in which the toll in coordinated terrorist attacks rose to 125 dead.

Commandos dropped from a helicopter as sharpshooters opened fire on the five-story headquarters of the Jewish outreach group Chabad Lubavitch. Six trucks of soldiers had been brought in to surround the building.

The attack occurred as Indian forces rooted through two smoldering luxury hotels here this morning, searching for survivors, the dead, and the last of the gunmen whose choreographed rampage of terror through this cosmopolitan city spawned a mystery about their identities and motive.

Snipers stationed in buildings opposite the Chabad center began the attack there, with sustained fire on the building as at least nine commandos lowered themselves by rope onto the roof from an Indian Air Force helicopter. The outcome of the firefight was not immediately clear.

By midmorning today, officials estimated that possibly 10 militants remained at large - one in the Taj Mahal Palace and Tower hotel and four others in the Oberoi hotel, with another five holed up in the Jewish center.

They said 15 hotel guests, mostly foreigners, remained trapped inside a 21-floor wing of the Oberoi.

Ten hostages believed to be Israeli citizens were being held at the Jewish center, in Nariman House, where Indian security forces launched a counterattack as the city awoke.

"We watched 24 commandoes surround the building," said Bharat Phulsunge, a 28-year-old insurance agent. "We can hear gunfire and explosions from inside. It's still very tense." Earlier yesterday, two workers and a child escaped from the building, the only people to emerge so far. The child was identified as Moshe Holtzberg, 2, the son of Rabbi Gavriel Noach Holtzberg, a New York native and the main representative at Chabad House. The child was unharmed, but his clothes were soaked in blood.

More than 325 people were injured in Wednesday's terrorist attacks, according to official reports. The injured included three Americans. Eight foreigners were among the dead.

Indian military commandos continued to exchange fire with an unknown number of militants yesterday as the drama unfolded, one day after gunmen pounced on India's financial capital, storming several public places, including the Jewish center, a train station, and hospitals.

Nine suspects reportedly were in custody.

The attacks apparently targeted American, Israeli, and British citizens for use as hostages, the officials said. The dead included at least one Australian, a Japanese, and a British national. A dozen police officers also were slain, including the leader of Mumbai's antiterrorist unit.

Throughout the day, commandos brought hostages, trapped guests, and bodies out of the hotels in small groups while firefighters battled blazes that erupted periodically. US officials in India checked with local authorities and hospitals to learn the extent of the casualties involving Americans.

More than 400 people were brought out of the Taj Mahal hotel. Authorities said they had killed three gunmen at the hotel. It remained unclear how many dead lay uncounted.

A solemn Prime Minister Manmohan Singh addressed the nation by television yesterday evening, pledging that the militants "would not succeed in their nefarious design." Singh asserted that the group behind the attacks "was based outside the country," and warned India's neighbors "that the use of their territory for launching attacks on us will not be tolerated."

After past terrorist attacks, Indian leaders have pointed the finger at Pakistani Islamic extremists or intelligence operatives, two forces that often team up for operations in South Asia. Pakistan's defense minister condemned the Mumbai attacks yesterday and warned India to refrain from blaming Pakistan, a longtime rival.

President Bush telephoned Singh to express his condolences and offer assistance to India as it works "to restore order, provide safety to its people and comfort to the victims and their families, and investigate these despicable acts," according to a White House spokeswoman.

The violence began Wednesday evening as militants invaded the Taj Mahal and the Oberoi, two luxury hotels favored by foreigners. They fired automatic weapons and threw grenades, sending panicked guests scrambling for safety and trapping others inside the hotels.

Several witnesses said the gunmen demanded to see passports from cornered guests, separating American and British tourists from the others.

The victims included Mumbai's antiterrorism chief, Hemant Karkare, and two of his senior police officers, which complicated the law enforcement response to the attacks. Television video showed Karkare donning a flak jacket and helmet minutes before heading into one of the hotels.

Witnesses said the attackers appeared to fire at random and made no effort to hide their identities, which, analysts suggested, signaled a readiness to die.

Local government officials said as many as four attackers were killed and nine suspects were arrested.

Throughout yesterday, a series of explosions and fires continued to rage at the Taj Majal Palace. Late in the afternoon, military officials said most of the hostages there had been freed, adding that some guests might be in their rooms, fearful of emerging amid gunfire.

Soon after dark, numerous Indian commandos emerged from the hotel with guns pointed down, leading observers to surmise that the standoff was over.

Officials said the commandos seized a small arsenal of weapons that included hand grenades, tear gas pistols, knives, and more than 80 magazines of ammunition. Also confiscated were several credit cards with the names and pictures of suspected militants, officials said.

But the Oberoi remained a battle zone late into the day.

M.L. Kumawat, an Indian Home Ministry official, said many of the 21 floors of the Oberoi had been cleared by security agencies, but others were considered dangerous.

Hours after nightfall, another fire erupted at the Oberoi, this time on the 19th floor, witnesses said, and several people were believed trapped by flames.

A previously unknown group calling itself Deccan Mujahedeen on Wednesday said it carried out the attacks, but officials were unclear whether the claim was true. Throughout yesterday, Indian media speculated on how the nation's intelligence network could have been unaware of the organization.

One report indicated that the militants might have come ashore after dark Wednesday. One fisherman told authorities he saw three boats land on the beach.

When a bystander asked one of the men who they were, he reportedly responded, "We're military, just shut up," the witness said.

Most of Mumbai remained in shock yesterday. In many neighborhoods, 80 percent of the businesses remained closed; police warned residents to stay home, where many followed the unfolding drama on television.

Some people referred to the attacks as "India's 9/11," comparing the targeting of India's business elite and foreign investors to the 2001 attacks in the United States. Mumbai is South Asia's financial hub and an entertainment capital, and many of the glitzy targets symbolize the new cosmopolitan face of the world's largest democracy.

Once known as Bombay, the city is home to India's commodities and stock exchanges, which remained closed yesterday.

Although Mumbai has been the scene of several terrorist attacks in recent years, analysts said Wednesday's assaults required a previously unseen degree of reconnaissance and planning.

The scale and synchronization of the attacks pointed to the probable involvement of experienced commanders, some observers said, suggesting possible foreign involvement.