A star search that may affect US applicants 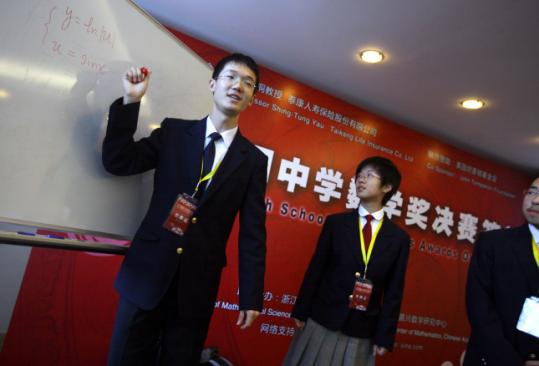 BEIJING - Don't be fooled by the teenager's slender frame and wire-rimmed glasses. His name is Tiger - and he's an American high school student's worst nightmare.

The 16-year-old junior, as adept at proving geometry theorems as he is at defending a soccer shot, has set his sights on Harvard University. And Harvard, on him.

Just last month, Tiger and dozens of China's brightest students gathered in a five-star hotel blocks from Tiananmen Square for the final round of a math contest that planted the Crimson flag firmly in the world's most populous nation. They competed under the watchful gaze of William Fitzsimmons, Harvard's admissions dean, who has handpicked undergraduates for three decades.

Students such as Tiger, or Li Taibo in Chinese, represent the future face of elite American colleges, their greatest hope as they vie to maintain international dominance. It's especially true for Harvard, as it tries to elevate the profile of its math and sciences to be on par with its legendary humanities program.

Eager to cultivate generations of students in this new frontier, admissions officers from premier American universities are scouring China to recruit top high school students who may dismiss such colleges as out of reach and unaffordable. In last month's campaign during the contest, Harvard, Brown, and Stanford representatives touted liberal arts education, research opportunities, and American dorm life to students and their parents - even promising full scholarships.

"There are no quotas, no limits on the number of Chinese students we might take," Fitzsimmons told a standing-room-only crowd of more than 300 students during a visit to Beijing No. 4 High School. "We know there are very good students from China not applying now. I hope to get them into the pool to compete."

That message is disconcerting for American students toiling to land a coveted spot in Harvard's 1,660-student freshman class - and controversial among some educators. But Fitzsimmons and others say they had better get used to the idea. Applications from China have exploded in recent years as the Communist country opens up to the world, and they're only going to increase.

Even fifth-graders in Wellesley, Newton, and Brookline, who as adults will face international competition for jobs, should begin beefing up their academic résumés if they want a shot at an Ivy League education, Fitzsimmons said.

"We're trying to send a message to young people, as young as primary school, to make the most of their studies," he said, "because they'll be competing with students around the world later on."

The first Shing-Tung Yau High School Mathematics Awards, named for the Harvard math professor who organized it, drew more than 900 students from all corners of the country. The 40 finalists who assembled for three days in Beijing had spent the past six months preparing to shine - not only for the judges, which included three Harvard professors, but also for the admissions deans they would meet.

"This is a historic event," Fitzsimmons said. "We're trying to get out the word that Harvard is world class in math, science, and engineering, not just in the humanities."

The stakes were clear for the Chinese students and their families at the contest. Nervous parents and teachers, barred from the hotel conference room where each team presented their projects, knelt outside, snapping photos of contestants and judges through the glass doors.

Down the carpeted hallway that reeked of cigarettes, students in school uniforms adjusted their ties and huddled among teammates, practicing their presentations in hushed murmurs.

Raised on an army base on the outskirts of China's capital, Tiger lives at school in a spartan third-floor dorm room with five other boys. He has never set foot in the United States. But he visits Harvard often - on the Web, imagining himself crossing the historic brick campus to class or, perhaps, to a party.

"Harvard is so beautiful compared to the campuses of Chinese universities," said Tiger, who crams for the verbal portion of the SAT from his lower bunk bed. "I want to go because it is said that schools in the United States inspire you to think, instead of just teaching you what to do."

The competition served as a vivid reminder of how the global economy is hitting college admissions, much like it's hitting US corporations. Many US universities have begun recruiting in China in recent years, but those efforts have tended to focus on high school visits or university fairs, and none have generated the slew of Chinese media attention that Harvard garnered last month.

And while universities are seeking applicants throughout the world, China's rising influence and the academic devotion of students there make it especially appealing.

Ushered around Beijing from luncheons to evening meetings during his five days here, Fitzsimmons played the role of a diplomat.

In speeches to students and dignitaries, he predicted that Harvard's outreach to Chinese students will foster improved US-China relations that will ultimately benefit the world. Harvard-educated Chinese, he reasoned, will probably return to the fast-growing country to help shape its development as new neighborhoods of high-rise apartments, megamalls, and whole financial centers spring up on what was once farmland.

The number of Chinese students applying to Harvard has swelled from only 10 two decades ago to nearly 500 last school year. Fewer than 8 percent of all applicants are admitted. Thirty-five Chinese undergraduates are currently enrolled.

Applicants from China will increase even more if the Chinese government allows students on the mainland to take the SAT without having to jet off to Hong Kong or Taiwan - a mission Fitzsimmons pursued during private talks with high-ranking party officials.

Professor Yau, chairman of Harvard's math department who conceived of last month's competition, has returned to his homeland to not only spur the improvement of math education in China through the contest, which rewards students for creativity and collaboration, but also to help funnel a generation of Chinese high school students into America's premiere colleges. He even vowed to pay personally for the travels of needy students to conquer the SAT.

"I want to help the very poorest students in China make their dreams come true," said Yau, who won the prestigious Fields Medal and is considered one of the world's greatest mathematicians.

But that's a difficult prospect for some of his colleagues in Cambridge to swallow. While he supports international admissions, Harry Lewis, a computer science professor, worries that Harvard is making it harder for American students to get in.

That being said, Lewis acknowledged that "we're not alarmed enough in this country about the lack of interest and motivation we're giving to math education here."

During the contest, in impeccable English, Tiger explained to the judges his team's research into maximizing the amount of air that flows into a room by adjusting the angles of the windows.

But he is no math geek. Tiger plays badminton and soccer, heads the Model United Nations team at one of China's best public high schools, belongs to its literary club. And in the midst of the math contest, he was elected president of his 4,000-student school.

Tiger's competitors were just as well rounded, even though extracurricular activities do not help them get into Chinese colleges, which weigh only scores on a two-day national exam.

Wang Shun Zhi, whose team devised an algorithm to ease traffic on Beijing's famously congested streets, leads his school's debate team and founded the humanism club, in addition to competing on the math and physics teams. Qin Yipeng, who invented a mathematical model for snow sweeping, was able to read more than 300 Chinese characters by age 3 and has won prizes in math, physics, chemistry, and English.

And Li Zhoujia, who equalized water distribution in sprinkler systems to prevent students from getting soaked through their open classroom window, is a lead spiker on her school's volleyball team, an accomplished singer and actress, and editor of the student newspaper.

All envisioned a future at an elite US university. The teenagers passed out résumés and personal biographies at a reception with the admissions deans, whom students addressed as "your excellences" and "preeminent deans."

"Just have fun reading it," Li urged Sarah Clark Donahue, Harvard's director of financial aid, as she handed over her two-page dossier.

In the end, Tiger's name was not called during the awards ceremony.

"It's OK. It's OK," he said softly in the surreal setting, a drafty, 600-year-old ancestral temple just outside the walls of the Forbidden City. Women in traditional dresses ushered dignitaries and academics down the red carpet as a chorus of ancient bells tolled.

"I just want to know how I can improve," he said. "I expect there will be a time when my name will finally be called."

The next morning, a Saturday, Tiger showed up at his school's weekly math club and spent three hours learning about number theory - "just for fun," he said.