CIA expands use of drones in Pakistan 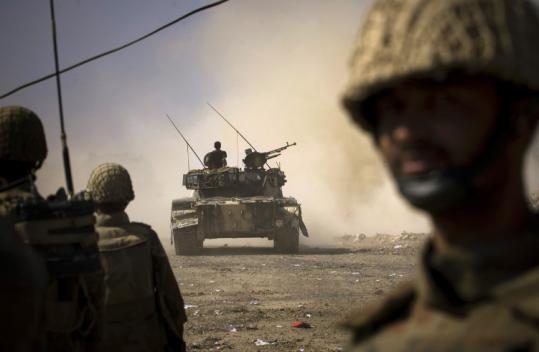 WASHINGTON - The White House has backed away from using US commandos for further ground raids into Pakistan after furious complaints from its government, relying instead on an intensifying campaign of airstrikes by the Central Intelligence Agency against militants in the Pakistani mountains.

According to US and Pakistani officials, attacks by remotely piloted Predator aircraft have increased sharply in frequency and scope in the past three months. Through today, there were at least 19 Predator strikes since the beginning of August, some deep inside Pakistan's tribal areas, compared with five strikes during the first seven months of 2008.

The latest strike was today, when a suspected US missile hit a compound used by Taliban militants. Pakistani intelligence officials said the strike in South Waziristan killed up to 20 people. They said the identity of the victims was not immediately clear.

US officials have said that relying on airstrikes alone would not enable the United States to weaken Al Qaeda's grip in the tribal areas permanently. Within the government, advocates of the ground raids have argued that only by sending Special Operations forces into Pakistan can the United States successfully capture suspected operatives and interrogate them for information about top Qaida leaders.

The decision to focus on an intensified Predator campaign using Hellfire missiles appears to reflect dwindling options on the part of the White House for striking a blow against Al Qaeda in the Bush administration's waning days.

After months of debate within the administration and mounting frustration over Pakistan's failure to carry out more aggressive counterterrorism operations, President Bush finally gave his approval in July for ground missions inside Pakistan. But the only US ground mission known to have taken place was a Special Operations raid on Sept. 3, in which the roughly two dozen people killed included some civilians. US officials say there has not been another commando operation since.

US officials acknowledge that following the Sept. 3 raid they were surprised by the intensity of the Pakistani response, which included an unannounced visit to Washington, three weeks after the incursion, by the country's national security adviser, Mahmud Ali Durrani. He registered his anger in person with top White House officials, including Stephen J. Hadley, Bush's national security adviser.

A senior administration official said yesterday that no tacit agreement had been reached between the sides to allow increased Predator strikes in exchange for a backing off from additional US ground raids, an option that the officials said remained on the table. But Pakistani officials have made clear that they regard the Predator attacks as a less objectionable violation of Pakistani sovereignty.

"There's always a balance between respecting full Pakistani sovereignty, even in places where they're not capable of exercising that sovereignty, and the need for our force protection," said the administration official, who spoke on condition of anonymity.

As part of the intensified attacks in recent months, the CIA has expanded its list of targets inside Pakistan and has gained approval from the government in Islamabad to bolster eavesdropping operations in the border region, US officials said.