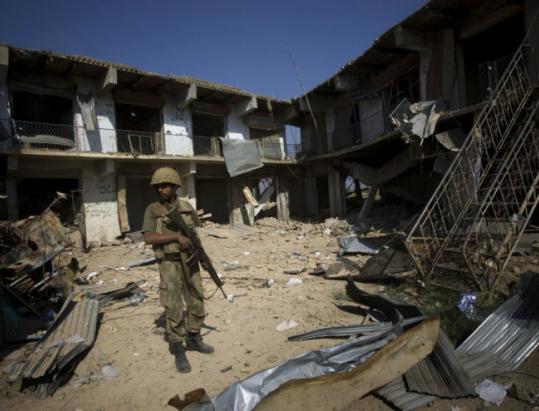 LOI SAM, Pakistan - A two-month offensive by Pakistani forces has driven militants from a stronghold through which Taliban and Al Qaeda fighters had poured into neighboring Afghanistan to attack US troops, the army said yesterday.

But the operation claimed the lives of at least 95 civilians. Their deaths are a crucial issue here that observers warn can only increase sympathy for the militants.

The military said its forces captured the village Loi Sam in the Bajur tribal region Friday after a long and bloody struggle. The town is at a vital intersection linking the border to three neighboring Pakistan regions.

"Now we have complete control in this area from where miscreants used to go to Afghanistan, Mohmand, Dir, and Swat," said Major General Athar Abbas, an army spokesman. He said the militants were expelled or killed.

Bajur is part of Pakistan's tribal belt that has become the stronghold of Taliban and Al Qaeda fighters waging an intensifying insurgency on both sides of the border.

The army offensive in Bajur was launched in early August, after government officials declared it a "mega-sanctuary" for militants who had set up a virtual mini-state, complete with Taliban-style courts.

US officials, who worried about record fatalities among their forces in Afghanistan, have praised the operation and said it was helping reduce violence on the Afghan side. But the Americans have not halted missile strikes on suspected militants hide-outs in other parts of Pakistan's wild border region, despite Islamabad's protests that the attacks violate its sovereignty.

The army says it faced stiff resistance near Loi Sam from Taliban militants reinforced by foreign fighters, including some from Afghanistan.

Major General Tariq Khan, who commands a paramilitary force, said it could still take six months to a year to gain complete control of Bajur.

Violence and government restrictions have made it virtually impossible to verify accounts of the fighting. Khan said a total of 1,500 suspected militants had died in the operation since August, along with 73 army soldiers.

The region has been seen as a possible hiding place for Al Qaeda leader Osama bin Laden and his deputy, Ayman al-Zawahri, but Khan said the troops had not picked up their trail.

Khan's count of 95 civilian deaths was the first official estimate of noncombatants killed in the fighting. He didn't say whether they were killed by militants or troops, though officials have acknowledged that artillery and air strikes have heavily damaged many residential areas.

Nearly 200,000 people have fled the fighting, many of them to rough camps in Pakistan and Afghanistan.

Reporters driven to Loi Sam yesterday saw damaged residential compounds, some of them connected by militant tunnels, lining both sides of the road.

In Loi Sam itself, hardly a building had escaped. Houses, shops, and gas stations were badly damaged or destroyed. The only people on the debris-strewn streets were soldiers.

Abbas said victims would be compensated for the loss of their homes, crops, and the animals dying untended in the fields.

Pakistan's government has promised to flood the border area with development work, much of it funded by Washington, to combat the misery and ignorance in which religious extremism has thrived.

Observers say Pakistani authorities and their Western backers have failed to keep such promises in the past, breeding distrust of the government in a region where it has never had control.

US troops arrived in Pakistan this month to provide training to the paramilitary Frontier Corps in an attempt to transform it into the main fighting force along the border.

Officials hope the Frontier Corps, recruited from the Pashtun tribes that straddle the border, will prove more effective in preventing militants from resurfacing than the regular army, dominated by ethnic Punjabis and viewed as occupiers in the border zone.

Bajur is one of seven semiautonomous ethnic Pashtun regions in northwest Pakistan, known as tribal agencies, where Al Qaeda and Taliban have been expanding their influence in recent years. The military describes Bajur, which was heavily fortified by militants, as a center of insurgent activity because it provides easy access to the other tribal agencies.

In recent weeks, US forces have carried out about a dozen missile strikes and a commando raid in North and South Waziristan, to the southeast of Bajur.

Several militant groups operate in the northwest tribal areas, including various Taliban groups and Al Qaeda. While all are opposed to the United States, only some are fighting the Pakistani government.