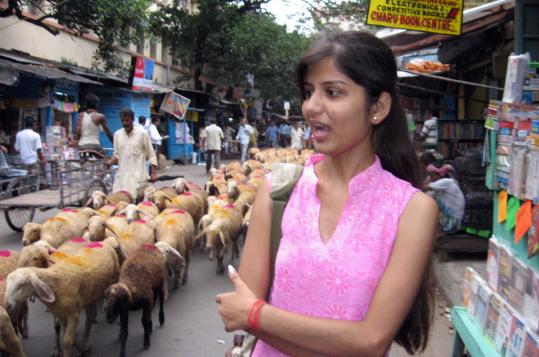 Sandhya Tiwary said shutting down the open-air book kiosks on Calcutta's College Street would be a mistake. ''We don't want to lose this. It's the real Calcutta,'' she said. (Emily Wax/Washington Post)
By Emily Wax Washington Post / October 10, 2008
Text size – +

CALCUTTA - Through summer's sweltering heat, through the monsoon season's torrential downpours and even after the city's recent accumulation of air-conditioned shopping malls, Sandhya Tiwary, 20, and her friends remain loyal to their afternoon strolls through the crowded, muddy lanes of College Street, long known as India's "neighborhood of books."

It's 3 p.m., just after their university classes end. On a bustling street corner, Tiwary and her friends eat a quick lunch of Calcutta's favorite street food: steaming, egg-dipped chicken Kathi rolls - with a side of freshly churned yogurt served in a salmon-colored earthen pot. Then, the group takes off to browse the secondhand - and sometimes third- or fourth-hand - books.

The 1,200 dilapidated bookstore kiosks create a maze of roadside cubbyholes stacked with dusty dictionaries in Hindi, underlined chemistry textbooks in Urdu and dozens of worn copies of a three-volume "History of West Bengal." Nearby are piles of "Mars and Venus in the Bedroom."

With booksellers bargaining in Bengali, the air fills with the merchants' favorite phrases. "Nowhere else on this green earth is such a deal," or "One fine day, you will know you have made a real fool of me for this generous price."

The constant yelling of famous book titles mixes with the constant honking of car and rickshaw horns.

"This street, this way of life - of buying books, of being together - is a grand part of our heritage," said Tiwary, a geography student at the University of Calcutta, which is just around the block.

Suddenly, several herds of sheep amble noisily by on their way to a nearby market. Bells jangling, hundreds of the furry, coarse-wooled animals step among the piles of books.

Shopkeepers tsk-tsk, dusting off their wares. Tiwary laughs and laughs, for several minutes. Her friend also cannot stop giggling, removing the headphones attached to her iPod Mini as she holds an armful of Indian chick lit.

"Only in our India, only in our Calcutta," Tiwary says over hundreds of earsplitting sheep. "We don't want to lose this. It's the real Calcutta."

At 4 p.m., the monsoon rains pour down so furiously that shopkeepers hustle to cover their books with blue plastic tarps.

Booksellers estimate that the last five generations of city dwellers have shopped these narrow lanes. Even in the rain, the bookstalls are the hub of intellectual activity in the city, nestled amid Presidency College, the oldest college in India. Dozens of other institutions of higher learning are within walking distance.

The city has tried to shut down the market, lamented several booksellers gathered in the rain. Officials wanted the entire neighborhood of books to relocate to a climate-controlled "book mall," which was scheduled to be built by 2009. No sheep allowed, one bookseller giggled.

But here in the world's largest democracy, the booksellers believe they will win.

With a strong literary tradition, Calcutta has given birth to some of India's most famous writers, including Rabindranath Tagore, who won the 1913 Nobel Prize for literature for "Gitanjali," his epic verse. He is seen as the Leo Tolstoy of India.

At 4:10 p.m., to get out of the still-pouring rain, a rush of young people climb several flights of dingy, winding stairs, past peeling paint and posters advertising English classes to prospective call center employees.

At the top of the stairs, they find the warehouse-like Indian Coffee House, a legendary cafe that has attracted the city's intelligentsia for decades.

This gathering is the city's afternoon adda, a ritual in Bengali culture. It's a mix of high-level banter over ancient literature, debates over India's role in geopolitics and perhaps a quick chat about cricket scores.

"We like it here," said Mihir Bhatta, a retired linguistics professor. "And when we are finished, we can go browsing for books, to see if our ideas are right!"