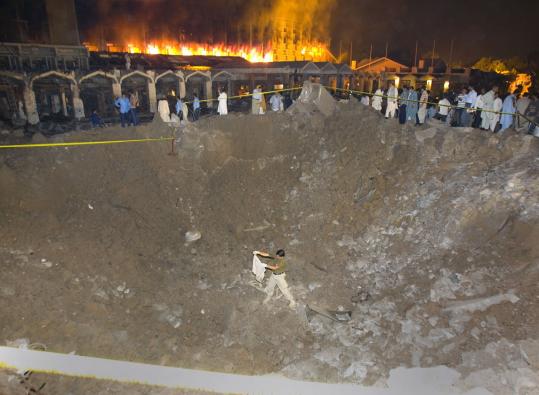 ISLAMABAD, Pakistan - A massive suicide truck bomb gutted the heavily guarded Marriott Hotel in Pakistan's capital yesterday, killing at least 40 people and injuring hundreds. Dozens more were feared dead inside the building, which was still burning hours after the attack.

The targeting of the American hotel chain appeared to be one of the largest terrorist attacks ever in Pakistan and occurred at a time of growing anger in Pakistan over a wave of cross-border strikes on militant bases by US forces in Afghanistan.

The bomb left a vast crater some 30 feet deep in front of the main building, where rescuers ferried a stream of bloodied bodies. The fire was still burning at 2 a.m., six hours after the blast. It spread from the front to the back, gutting most of the building and sending up a thick pall of smoke over the area.

Witnesses and officials said a large truck rammed two heavy metal barriers blocking the hotel entrance around 8 p.m., when four restaurants inside would have been packed with diners at the hour that Muslims break their daily fast during the holy month of Ramadan. The five-story Marriott had been a favorite place for foreigners, as well as Pakistani politicians and business people, to stay and socialize in Islamabad despite repeated militant attacks on the hotel. One American was confirmed dead.

The bombing occurred hours after President Asif Ali Zardari made his first address to Parliament, less than a mile away from the hotel, and days ahead of the new leader's meeting with President Bush on Tuesday in New York on the sidelines of the UN General Assembly.

Rehman Malik, head of Pakistan's Interior Ministry, said authorities had received intelligence that there might be militant activity timed to coincide with Zardari's inaugural address and security had been tightened.

After the attack, Zardari pledged to rid his country of the "cancer" of terrorism. In a brief statement broadcast on national television, he sent condolences to the victims and said he understood their pain because of the assassination of his wife, former prime minister Benazir Bhutto.

He appealed to Pakistan's democratic forces to unite to defeat terrorism but did not indicate who might have been behind the attack. Pakistani officials, however, say Taliban and Al Qaeda militants based in the northwest of the country work closely together.

A US State Department official led three colleagues through the rubble from the charred building, one of them bleeding heavily from a wound on the side of his head.

One of the four, who identified himself only as Tony, said they had been moving toward the rear of a Chinese restaurant inside the hotel after a first, small blast when a second explosion hurled them against the back wall.

"Then we saw a big truck coming to the gates," he said. "After that, it was just smoke and darkness."

Mohammed Asghar, a worker from a nearby office, said that there was more than one man in the truck and that they had argued with the hotel guards.

"Then there was a flash of light, the truck caught fire, and then exploded with an enormous bang," he said.

Senior police official Asghar Raza Gardaizi said rescuers had counted at least 40 bodies at the scene and he feared there were "dozens more dead inside."

Information Minister Sherry Rehman said 250 people were wounded. Two hospitals said 10 foreigners were among those in their treatment, including one each from Germany, Saudi Arabia, Morocco, and Afghanistan.

"This attack is a reminder of the ongoing threat faced by Pakistan, the United States, and all those who stand against violent extremism," said Bush, who extended his condolences to the families of those killed.

The presidential candidates issued statements as well, with Senator Barack Obama saying, "As the attack earlier this week on our embassy in Yemen shows, over seven years after 9/11, the terrorist threat knows no borders, and the terrorists threaten innocent civilians of all religions and regions. Now is the time to refocus our efforts on defeating Al Qaeda and securing the American people."

Senator John McCain said the bombing "must serve to deepen the resolve of Americans and Pakistanis alike to aggressively confront those terrorist groups that seek our destruction. . . . We must work with the elected government of Pakistan to find those responsible, hold them accountable, and diminish their ability to threaten us and our allies in the future."