Zardari has been marked by legal woes and tragedy 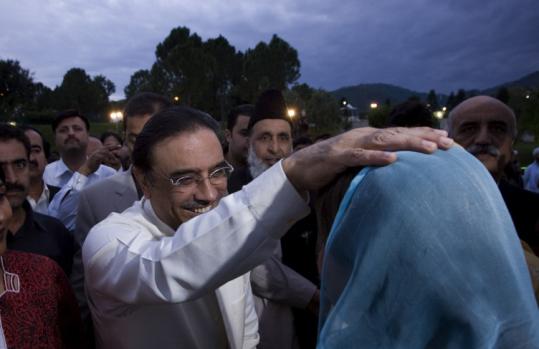 ISLAMABAD, Pakistan - The man elected president of nuclear-armed Pakistan in yesterday's election is a horse-loving aristocrat who has spent more years in prison than in politics - a novice leader lifted to prominence by his marriage to Benazir Bhutto and propelled into power by her slaying.

Asif Ali Zardari, the man who will replace America's longtime ally, Pervez Musharraf, carries the baggage of years of corruption charges and a mixed record on confronting the looming threat of the resurgent Taliban movement tightening its grip on Pakistan's border regions and possibly sheltering the Al Qaeda leadership.

Like his wife, Zardari has been branded as supremely corrupt and pursued through the courts by foes including Musharraf. A decade in jail damaged his health - perhaps even his mind - though he was never convicted.

Now, eight months after Bhutto's assassination in a gun-and-bomb attack, his trademark grin is back. Zardari, 53, revealed his political steel in taking the reins of her party - Pakistan's biggest - and leading it to victory in February parliamentary elections.

Once an outsider to party politics, he will become one of the most powerful civilian leaders in the nation's 61-year history.

Until his arranged marriage to Bhutto in 1987, Zardari was the unremarkable son of a landowning businessman and tribal chief from the southern province of Sindh.

Like many of this Muslim country's elite, he attended Christian missionary schools and a top boarding school on the banks of the Indus River near Hyderabad. He has claimed to hold a bachelor's degree from a business school in London, but his party has been unable to produce a certificate.

Winning the hand of Bhutto, daughter of Pakistan's most prominent political family, cemented his reputation as a charmer. Bhutto said he was gallant and caring, and she appreciated the fact that he understood that politics would dominate her attention.

However, Zardari says he had little idea of the political storm that went along with the marriage. It was a sharp learning curve.

Zardari was quickly accused of meddling in the affairs of Bhutto's Pakistan People's Party and sidelining party stalwarts in favor of cronies. He served as minister for the environment and investment in the second of her two governments, each of which was dismissed before the end of its term for corruption and misrule.

He was accused of pocketing commissions on government contracts for everything from a license to import gold to the purchase of 8,000 Polish tractors.

At one point, the couple was accused of spiriting $1.5 billion out of the country. Zardari was charged with murder in the mysterious shooting death of Bhutto's estranged brother. He was accused of spending state money on polo ponies.

He spent about 11 years in jail in two terms as well as marathon court proceedings. But he was never convicted at home or in corruption and money-laundering investigations in Britain, Spain, and Switzerland.

Zardari insists that the cases were politically motivated attempts - first by archrival Nawaz Sharif, later by Musharraf and the military-dominated establishment he represented - to demonize his wife and prevent her return from exile in Dubai and London.