A delta of death remains in Burma 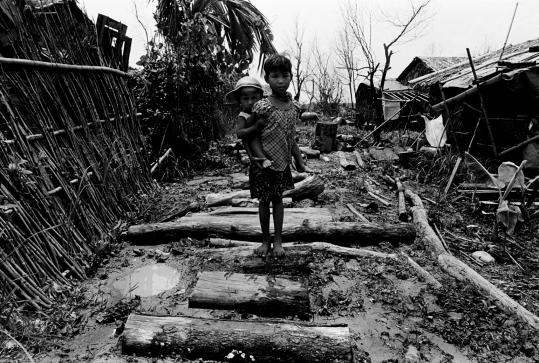 BANGKOK - Nearly four months after the cyclone, the Irrawaddy Delta in Burma is a flat, dark expanse of ruin populated by dazed survivors, unburied bodies and visions of wandering, moaning ghosts.

The region seems to have avoided mass starvation and epidemic, and people are rebuilding their precarious lives in this vast and often flooded marshland where the margin between survival and death has always been thin.

Within that thin margin, recent visitors say, many of the survivors seem to have lost their spark of life, and some of the dead seem not yet to have disappeared as they haunt the minds of those they left behind.

"There is a weariness in people's eyes here," said a photographer who has been chronicling the aftermath of Cyclone Nargis, which struck on May 3. He spoke on condition of anonymity because access to the region is forbidden to foreign journalists.

"There's a lost feeling that you get," he said. "People are physically, mentally and emotionally exhausted. Some of them don't have the strength to start over."

After an international furor over the government's refusal to admit foreign relief workers, a tightly controlled system has been put in place, and aid is reaching much of the area, where the United Nations says 2.4 million people were affected.

The cyclone left 138,000 people dead or missing and 800,000 homeless, according to UN figures, after tremendous winds and a storm surge that resembled a tsunami.

It leveled most of the fragile thatch homes in its path, uprooted trees, swept away the livestock and fishing boats that provided a livelihood and polluted many rice fields with salt.

For those fields that survived, this year's planting season has now passed, and experts say it may be more than a year before many people see their next decent harvest.

Although some houses are being rebuilt and some fields are being worked, the delta remains a vista of ruin and debris, where human and animal bones and the last decomposing bodies still cluster at the edges of waterways.

Fantastical tales circulate among the survivors, the photographer said, weaving a tapestry of stories from this world and the next.

There is the tale of the boy who survived by clinging to the back of a crocodile, and the story of the boatload of people stranded at low tide who sat waiting on the silt for the water to rise, surrounded by stranded corpses.

There is the story of the mother who was reunited with her baby after it was swept away in a washtub, and the story of the woman who gave birth as the cyclone hit and pulled her baby from the water by its umbilical cord.

And there are the stories of wandering ghosts, whose cries for help can be heard at night in haunted places that no villager dares to enter.

Among these phantoms and traumas, international relief workers have become the survivors' lifeline, delivering aid to all but the most remote parts of the delta.

More than 1,800 visas have been issued to these workers, aid officials say, though access to the hard-hit delta is slowed by an ever-more-complicated process of permissions and paperwork.

He said the reconstruction of schools, clinics and other infrastructure, which should be well underway by now, still lagged because of delays in delivering basic emergency assistance.

The xenophobic military junta that holds Burma in its grip prevented large-scale foreign aid deliveries for the first three crucial weeks after the cyclone, then loosened its controls only gradually and partially. It never did allow US and French naval vessels to bring in tons of aid and equipment.

But despite the early demands from around the world that the Burmese government permit open deliveries of aid, the United Nations says that nearly half the assistance pledged by foreign donors has yet to appear. Recently it said it had received $339 million in international donations, a shortfall of $300 million.

But life has always been bitter for the people of the Irrawaddy Delta, with 8 out of 10 families living in poverty even before the cyclone, according to Save the Children.

"They live on a thin line, every day of every year of every decade," the photographer said.

"And that is what they are doing now. They just keep going, day by day by day."