As Olympics near, many Chinese homes face wrecking ball 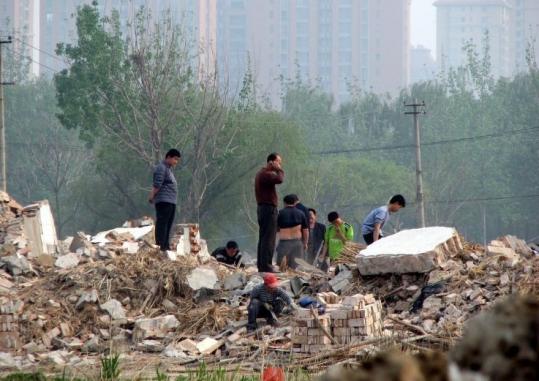 BEIJING - One place tourists aren't likely to see during the Olympic Games next month is a nut shop just north of the Forbidden City. Plastered with posters of Mao Zedong, Deng Xiaoping, President Hu Jintao and Premier Wen Jiabao and four Chinese flags, the little building appears held together with tape and string.

The Yu family moved in during the 1950s and opened a small shop in 1981, about the time China began its transformation from a planned economy into one that promotes entrepreneurs and, in theory, protects private property rights.

But the nut shop is now slated for the wrecking ball.

As officials step up efforts to beautify Beijing, especially along the Olympic torch relay route where the shop is located, the Yu family and their neighbors are left to wait, worry and appeal for sympathy.

"We hung pictures of the leaders because we want to show that we love the Communist Party," said Yu Changsheng, 45, one of the shop's owners. "Since I'm Chinese, I love China. I hope the Olympics will be hosted successfully."

More than 1.25 million people in Beijing - at times as many as 13,000 people a week - have been evicted since the city won its Olympic bid in 2001, according to the Geneva-based Center on Housing Rights and Evictions.

These residents are facing an issue that surfaces in every Olympics, gentrification in the name of improving a city's image. But in China, where the government is clamping down hard on anything that incites instability, those trying to fend off what appears to be inevitable have fewer options and face greater risk.

Some have posted homemade signs vowing to protect their homes until death, but others have looked for room to negotiate.

As Yu stood outside his store recently, neighbor Wang Zhenjiang pedaled up on a bicycle and asked how much the government had offered him. Yu replied: $49,523 for 398 square feet, a third of what it would take to buy a new apartment in the same neighborhood.

Wang, whose house is also scheduled to be torn down, reminded Yu that he had doubled the size of the place over the years and urged him to demand more.

"It's all about money," Wang said, jabbing the air. "Under a one-party dictatorship, ordinary people have to put up with being wronged."

But Yu said, "If they come, we can do nothing but let them tear it down. When have you ever heard of the weak winning a case?"

Not far from Yu's house, two sisters are facing eviction from a home that has been in their family for six generations. The women and their families sleep in leaky rooms sandwiched between their half-demolished small restaurant and grocery store. The government has torn down houses on both sides.

The sisters have erected a large wooden sign declaring, "Protect property ownership in line with the constitution; guard your home until death." Above their front door, a smaller paper sign asks, "Where is the law of the God?"

"The Olympic slogan is 'One World, One Dream,' " said Zhang Donghua, the younger sister's husband. "The constitution protects the private property of citizens, and our livelihood depends on this place. . . . How can this represent one world, one dream?"

A court order says the Yu house will be demolished Sunday, but the family has staved off confrontations in the past by gathering television crews and citizens angry about evictions.

"There's apparently a notice from Beijing municipality that all these cases must be solved" by July 20, said Nicholas Bequelin, a China researcher with New York-based Human Rights Watch. "There are some cases about which nobody wants to take the responsibility of ordering or carrying out the actual eviction, which is telling about the lack of legal basis for many of these evictions."

Outside Beijing, compensation has been less generous, but authorities don't dare violate the law too visibly in the capital for fear of stoking even more public anger, said Zhang Xingshui, a lawyer who has defended several families and farmers in land cases.

In the countryside, illegal land grabs, corruption and collusion between developers and local officials have led to riots.

"It's possible the government will take preemptive measures against activists, dissidents and evictees," Zhang said.

"They know this will conflict with the principle of the law, but they'll choose the less serious of the 'two harms,' and for the government, a smooth Olympics will be the top priority."

Last month, police shut down the Yus' store, and officials said the area would be turned into a park.

"Before the Olympics, we must tear it down, plant grass and paint the wall to make the street look great. The time is very tight," said Lu Dahong, a district official. Lu said the nut shop was operating illegally.