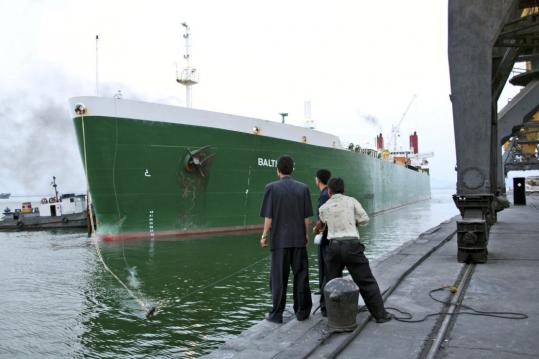 TOKYO - A US ship bearing 37,000 tons of wheat has arrived in North Korea, officials said yesterday, the first installment in what is scheduled to be a major expansion of international food aid in the closed totalitarian country.

The UN World Food Program said it had signed an anticipated agreement with North Korea that would increase the international feeding operation there to more than 5 million people, up from the 1.2 million people now being fed. The United States is to provide the bulk of the food this year. The agreement also promises to give UN monitors more access than ever to find out who is eating the free food.

"This agreement provides the best monitoring conditions the WFP has ever had in North Korea," said Tony Banbury, Asia director for the program, which has been funneling food to the famine-plagued North since the 1990s. "This marks a major advance in the way we work in this country."

The American food arrived on the heels of an extraordinary week of making nice on the part of North Korea, which in October 2006 frightened the world by exploding a small nuclear bomb.

On Thursday, Kim Jong Il's government handed over a long-delayed declaration that disclosed some details about its plutonium production. On Friday, it blew up a cooling tower at a disabled nuclear plant, allowing Western television crews to film the event.

The declaration prompted President Bush to ease some trade sanctions and begin a process to take North Korea off a list of countries that are officially designated as sponsors of terrorism.

The United Nations continues to warn that North Korea is on the brink of a humanitarian crisis. Crop failures have caused a food shortfall this year of 1.66 million tons, about double the need last year and the worst since 2001, the UN Food and Agriculture Organization said in April.

The United States says its food aid is determined by humanitarian need and that food is not used as a diplomatic lever. But its food is arriving during a season of much-improved, if still chilly and suspicious, relations between the North and the United States.

President Bush in 2001 described Kim's government as part of an "axis of evil" but began negotiating with it shortly after the nuclear test. The latest signals that North Korean paranoia about the West may be moderating are the terms under which Kim's government says it will allow food aid to be distributed. For the first time, the World Food Program will be allowed to deploy monitors who speak Korean to check that food goes to needy civilians, said Banbury, who spoke by telephone from his office in Bangkok.