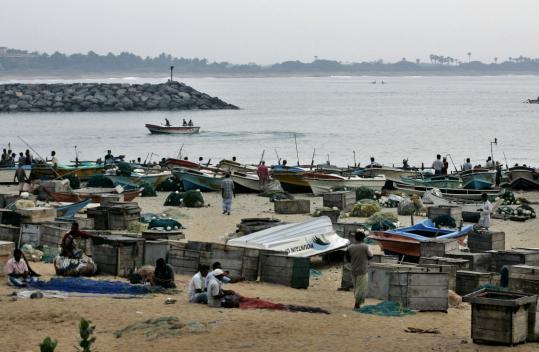 HAMBANTOTA, Sri Lanka - This battered harbor town on Sri Lanka's southern tip, with its scrawny men selling even scrawnier fish, seems an unlikely focus for an emerging international competition over energy supply routes that fuel much of the global economy.

An impoverished place still recovering from the devastation of the 2004 Indian Ocean tsunami, Hambantota has a desolate air, a sense of nowhereness, punctuated by the realization that looking south over the expanse of ocean, the next landfall is Antarctica.

But just over the horizon runs one of the world's great trade arteries, the shipping lanes where thousands of vessels carry oil from the Middle East and raw materials to Asia, returning with television sets, toys, and sneakers for European consumers.

These tankers provide 80 percent of China's oil and 65 percent of India's - fuel desperately needed for the two countries' rapidly growing economies. Japan, too, is almost totally dependent on energy supplies shipped through the Indian Ocean.

Any disruption - from terrorism, piracy, natural disaster, or war - could have devastating effects on these countries and, in an increasingly interdependent world, send ripples across the globe. When an unidentified ship attacked a Japanese oil tanker traveling through the Indian Ocean from South Korea to Saudi Arabia in April, the news sent oil prices to record highs.

For decades the world relied on the powerful US Navy to protect this vital sea lane. But as India and China gain economic heft, they are moving to expand their control of the waterway, sparking a new - and potentially dangerous - rivalry between Asia's emerging giants.

China has given massive aid to Indian Ocean nations, signing friendship pacts, building ports in Pakistan and Bangladesh as well as Sri Lanka, and reportedly setting up a listening post on one of Burma's islands near the strategic Strait of Malacca.

Now, India is trying to parry China's moves. It beat out China for a port project in Burma. And, flush with cash from its expanding economy, India is beefing up its military, with the expansion seemingly aimed at China. Washington and, to a lesser extent, Tokyo, are encouraging India's role as a counterweight to growing Chinese power.

Among China's latest moves is the billion-dollar port its engineers are building in Sri Lanka, an island country off India's southern coast. The Chinese insist the Hambantota port is a purely commercial move, and by all appearances, it is. But some in India see ominous designs behind the project, while others in countries surrounding India like the idea. A 2004 Pentagon report called Beijing's effort to expand its presence in the region China's "string of pearls."

No one wants war, and relations between the two nations are now at their closest since a brief 1962 border war in which China quickly routed Indian forces. Last year, trade between India and China grew to $37 billion and their two armies conducted their first-ever joint military exercise.

"Each pearl in the string is a link in a chain of the Chinese maritime presence," India's Navy chief, Admiral Sureesh Mehta, said in a speech in January, expressing concern that naval forces operating out of ports established by the Chinese could "take control over the world energy jugular."

"It is a pincer movement," said Rahul Bedi, a South Asia analyst with London-based Jane's Defense Weekly. "That, together with the slap India got in 1962, keeps them awake at night."

B. Raman, a hawkish, retired Indian intelligence official, expressed the fears of some Indians over the Chinese-built ports, saying he believes they will be used as naval bases to control the area.

But Zhao Gancheng, a South Asia analyst at the Chinese government-backed Shanghai Institute for International Studies, says ports like Hambantota are strictly commercial ventures. And Sri Lanka says the new port will be a windfall for its impoverished southern region.

India is clearly gearing its military expansion toward China rather than its longtime foe, and has set up listening stations in Mozambique and Madagascar, in part to monitor Chinese movements, Bedi noted. It also has an air base in Kazakhstan and a space monitoring post in Mongolia - both China's neighbors.

India has announced plans to have a fleet of aircraft carriers and nuclear submarines at sea in the next decade and recently tested nuclear-capable missiles that put China's major cities well in range. It is also reopening air force bases near the Chinese border.