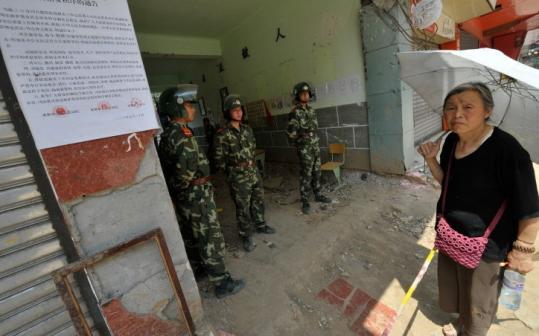 DUJIANGYAN, China - Authorities cordoned off some schools that collapsed in last month's mighty earthquake, keeping out grieving parents and reporters yesterday in a sign that Beijing was becoming increasingly nervous over accusations of shoddy construction.

Parents whose children were crushed in their classrooms during the May 12 quake vowed to keep pushing the government for compensation, as well as for an explanation of why so many schools fell when other buildings remained standing.

The students' deaths have become a political challenge for the government, which is trying to provide for the 5 million people left homeless amid growing accusations of corruption in school construction.

At Juyuan Middle School, where more than 270 pupils died, police officers blocked parents from entering the schoolyard yesterday. Dozens of people crowded behind police tape, some still waiting for children to be pulled from the rubble.

"There are still bodies in there!" people shouted.

Police refused to say why they sealed off the site. "We're just following orders from above," one officer said, refusing to elaborate.

Until this week, journalists were free to interview parents, who held protests and erected homemade memorials at collapsed schools, with many angrily accusing the government of corruption.

But police ordered a half-dozen reporters to stop filming and conducting interviews at the Juyuan school yesterday. The group was placed on a bus and sent back to the capital of Sichuan Province, Chengdu, an hour's drive away.

Parents said the school had been sealed off since Monday, when dozens of families turned their anger on the principal, who made a rare appearance surrounded by security officials but didn't address the crowd.

At a collapsed rural school that had received little media attention, a Chengdu official stopped two journalists and asked them to leave. "For your safety," Xu Guangjun said.

The quake killed more than 69,000 people, but Lu Guangjin, spokesman for the State Council, or China's Cabinet, said there was no count of how many were schoolchildren.

The government has said about 7,000 classrooms were destroyed, and angry parents and even rescuers have pointed to steel rods in broken concrete slabs that were thinner than a ballpoint pen.

Authorities promised to investigate the school collapses; there has been no word on any findings. Lu said officials were analyzing samples of the rubble, but the work would take time.

Lu stressed that the government took the matter seriously, with rescue and relief headquarters convening a special meeting several days ago to discuss how it would handle the collapsed schools. "The government at various levels must take this issue very seriously and put people's interests first. They must take a proactive approach and adopt appropriate measures to handle this issue effectively," Lu said at a press conference in Beijing.

Parents had tried to file a lawsuit a day earlier in Dujiangyan, saying they wanted compensation along with an explanation and apology from the government. Officials refused to accept their papers and turned them away from the courthouse.

"We tried the law, and if the law can't solve the problem, how do we solve it?" said one man who lost a daughter in the Juyuan collapse. "Eventually, we'll find these officials. We'll sue the province or even the central government," he said, before his wife shushed him.

Lu said that parents were expressing their grief and that the government would do its best to console them. "This is a very painful thing for the relatives, and anyone would be emotional. This needs to be resolved bit by bit, to let them slowly regain peace psychologically," he said.