Junta says it will handle distribution 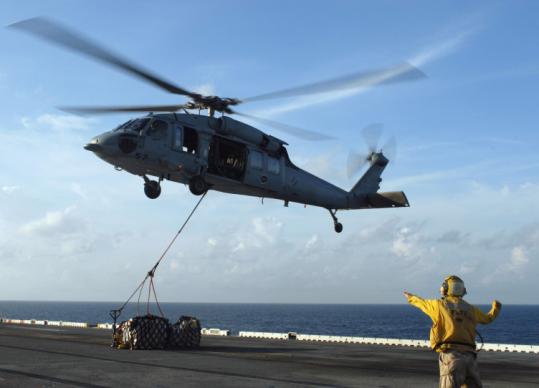 A Navy Seahawk helicopter took off from the USS Essex in the Gulf of Thailand yesterday with pallets of food, water, and emergency supplies intended for Burma. (David Didier/US Navy via Bloomberg News)
Email|Print|Single Page| Text size – + By Amy Kazmin and Colum Lynch Washington Post / May 10, 2008

BANGKOK - Burma's military government said yesterday that it had cleared a US military relief flight for cyclone victims, declaring itself ready to accept aid from "all quarters." But the junta reaffirmed that it alone will handle distribution, without foreign workers, a restriction that international agencies oppose.

Burma criticized for effort to run aid effort alone. A5

The mixed message left deep uncertainties in the delivery of vital food and medications a week after Tropical Cyclone Nargis swept through Burma's low-lying Irrawaddy Delta, swamping villages and leaving at least 60,000 people dead or missing.

As hundreds of thousands of people stranded by the tidal surge desperately await aid, the Bush administration pressured China and other allies of Burma's military government, hoping they would prevail on it to open its doors to help. "The situation is getting critical and there is only a small window of opportunity if we are to avert the spread of diseases that could multiply the already tragic number of casualties," said Noeleen Heyzer, the top UN official in Asia.

Diplomatic overtures were having little influence over the junta, which brutally put down a popular uprising last year in a country where the citizens' deeply held Buddhist traditions often interpret natural disasters as a sign of political illegitimacy.

The generals who rule Burma view foreign assistance - even in the storm's dire aftermath - as a potential threat to their two-decade hold on power.

Critics also are accusing the generals of callousness for proceeding with a referendum on a controversial new constitution in areas unaffected by the cyclone. Nationwide voting began today except in the hardest hit areas, where it was being delayed two weeks. Opponents have said the election rules favor the junta.

Heavy rain is forecast over the next week, which relief officials said would complicate efforts to distribute food, water, and medicine. Diplomats and aid groups said illness could raise the number of dead above 100,000.

Yesterday, authorities at the airport of Rangoon, Burma's largest city, impounded food and equipment delivered by two UN planes the previous day. In response, officials from the UN World Food Program announced a suspension of flights. Burma officials also turned away a search-and-rescue team from the Persian Gulf state of Qatar that arrived without clearance to enter the country.

Later yesterday, the World Food Program headquarters overturned the initial ruling and said that two more aid planes would land in Burma today but that discussions on who will distribute the supplies would continue.

"The UN system does not fly in goods, hand them to the government and then fly away," said Richard Horsey of the UN Office for the Coordination of Humanitarian Affairs. "We have certain requirements on accountability. Beneficiaries have to be identified on the basis of need, and delivery has to be monitored."

The United Nations has pressed for a week to get about 40 visas for UN logistics and disaster relief coordinators and technicians to help scale up a massive operation. But the government of Burma, which the military rulers renamed Myanmar in 1989, showed no sign of buckling on that issue.

"Currently Burma has prioritized receiving emergency relief provisions and making strenuous effort of delivering it with its own labor to the affected areas," the state-run New Light of Burma newspaper said. "Burma is not in a position to receive rescue and information teams from foreign countries at the moment."

Despite the uncertainties, the chief UN relief official, John Holmes, appealed to member nations at a meeting in New York yesterday to provide more than $187 million to fund UN relief operations likely to last many months. At that meeting, Burma's UN ambassador voiced some of the most conciliatory remarks heard from the government since the crisis began. "We are most thankful to the international community, our friends near and far, for the solidarity and generosity," Kyaw Tint Swe said, welcoming aid from "all quarters."

He also said Burma had agreed to allow a US military C-130 cargo plane to land in the country as soon as Monday. It was unclear whether it would be the first of many.

But with the Burma government prone to reversing itself, officials in Washington had discussed staging an airdrop into the country's flooded coastal regions without government permission but have now rejected that option. France announced it will dispatch toward Burma a warship loaded with 1,500 tons of humanitarian supplies.

Burma's prime minister in exile, Sein Win, added his own voice yesterday to the call to China to help open up his country. "China has more influence with Burma than India or any other country," he said in Washington.

The United Nations estimated that 1.9 million survivors were "severely affected" and that as of Wednesday, about 276,000 of them had received any relief supplies from UN agencies or international nongovernmental organizations.

International aid workers continued to paint a grim picture of conditions in the Irrawaddy Delta. "It's really horrific," said one Rangoon-based foreign aid worker. "There are villages where everyone survived, but they have been without food and water for a week and are just on a little hill, surrounded by water, waiting for help."

Soldiers have begun evacuating victims from the submerged areas, but often just to schools or monasteries to fend for themselves, with little or no food.