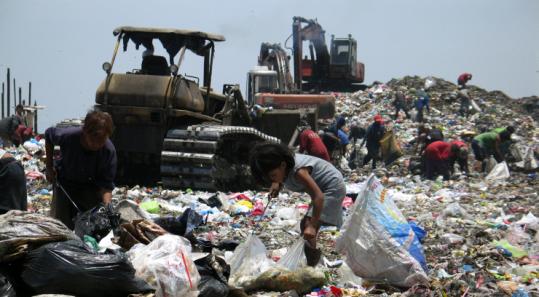 MANILA - It is in the heaving slums of Asia, amid sagging tin shacks and streets afloat with waste, that the soaring global price for rice hits hardest.

Until recently, Imelda Torreras had been able to count on peddling small bags of rice to her neighbors in the putrid streets of Manila's Tondo district, a way to supplement her family's meager income as garbage brokers.

Now, the rocketing price of rice has pushed her out of the food business.

Customers used to paying 65 cents for a kilogram of rice, or 2.2 pounds, have balked at increases that have pushed the price as high as 90 cents, a swift and devastating rise for the desperately poor.

"The price I was paying the wholesalers was rising so fast I couldn't increase my own prices fast enough to keep up," she said, sitting in the entrance to her home as neighborhood children tumbled in the mud around her. "People around here won't pay that kind of money for rice."

Indeed, rice prices on commodity futures markets have more than doubled in the last year. As with surging global wheat prices, the increase has been blamed on several factors, from rising transportation and fertilizer costs stemming from record oil prices, to hoarding by wholesalers who smell even bigger profits to be made down the road.

The result, economists and aid workers warn, is that millions of poor people may go hungry if the staple of their diet is priced beyond reach. The most vulnerable are those earning less than $2 a day, for whom even a small price increase means the loss of a crippling chunk of income.

President Gloria Macapagal Arroyo's government said it has enough rice to meet domestic needs for the next two months and dismissed warnings from some that higher rice prices could lead to riots. But the government acknowledged that it must secure 2.1 million tons of new orders by July. About a week ago, Philippine officials scoured global markets in a futile search to fill an order of 500,000 tons. Such ominous signs are behind the price jumps that are only beginning to touch places like Tondo.

Many people have turned to subsidized rice, which is sold from public offices or from the backs of government trucks that have begun showing up, without notice, in poor neighborhoods. Government rice is sold at 37 cents a kilo, though some Filipinos complain the quality is poor.

Torreras, her husband, and their family know they eat better than many in the neighborhood.

As a broker in the garbage business, she and others like her get first crack at a slum staple known as "pagpag:" the bits of meat shaken from chicken bones found in the waste that is dumped in the neighborhood by fast-food restaurants. "Pagpag" can be repackaged or grilled again for resale.

This making of a meal out of something so meager speaks to the survival instincts of those who live in Manila's slums.