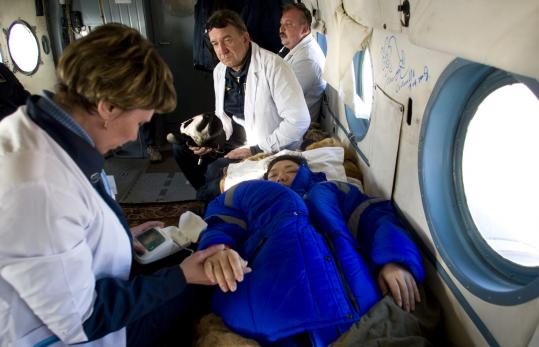 KAZAKH STEPPE, Kazakhstan - A Russian space capsule landed about 260 miles off course in Kazakhstan yesterday, but South Korea's first astronaut and crew members from the United States and Russia were unhurt.

The Soyuz capsule landed west of the target area and about 20 minutes late after it made a "ballistic landing," which is much steeper than normal, officials said.

He said the crew had begun leaving the capsule, which carried Yi So-yeon, a 29-year-old nanotechnology engineer from Seoul, US flight commander Peggy Whitson, and Russian flight engineer Yuri Malenchenko.

After the landing, rescue helicopters rushed to the scene. Plumes of smoke from a burning parachute rose from the capsule, which was lying on its side embedded about a foot into the ground.

The American astronaut was not seriously hurt but was not well enough to take part in a brief news conference, officials said. The Korean and the Russian looked fine as they traveled in a helicopter from the site to the Kazakh city of Kustanai.

Yi became the first South Korean aboard the International Space Station earlier this month. Whitson and Malenchenko were in the station for about six months, maintaining it and performing experiments. NASA said Whitson, 48, set a new American record for cumulative time in space: 377 days.

"Even though it is a very small place you can float back and forth under each other, over each other," Yi said of her experiences in zero gravity at the station.

Russian space officials said the capsule landed close to the Kazakh border, just southeast of the Russian city of Orsk.

It landed so far off course because it followed a steeper and shorter trajectory to earth when it made a ballistic landing, said Anatoly Perminov, head of Russia's Federal Space Agency.

A ballistic landing puts much higher gravity loads on the astronauts as the capsule spins toward earth. "The crew did not report that they had taken the ballistic landing course on reentry," Perminov said, adding that the incident would be investigated.

In October, a Soyuz capsule carrying Sheikh Muszaphar Shukor, a private citizen and orthopedic surgeon from Kuala Lumpur, Malaysia, touched down about 125 miles off course in a similar ballistic landing caused by a cable glitch. A US-Russian crew landed almost 300 miles off target during a Soyuz landing in May 2003.

The Soyuz is the world's longest-serving manned space capsule. An early version of the craft, the Vostok, took the world's first cosmonaut into orbit in 1961.

Earlier this month, President Vladimir Putin ordered his government in Russia to speed up construction of a new cosmodrome and development of a booster rocket in a bid to revive the nation's space glory.

This year is the 47th anniversary of the flight in which Russian cosmonaut Yuri Gagarin became the first man in space. The Soviets also launched the first satellite - Sputnik - and the first woman in space, and carried out the first spacewalk.

But Russia's space industries fell on hard times after the 1991 Soviet collapse when once-generous state funding dried up. They have survived mostly through launches of foreign commercial satellites and revenue from space tourists, wealthy individuals who have bought trips to the International Space Station.