Her party rejects British finding on the cause of death 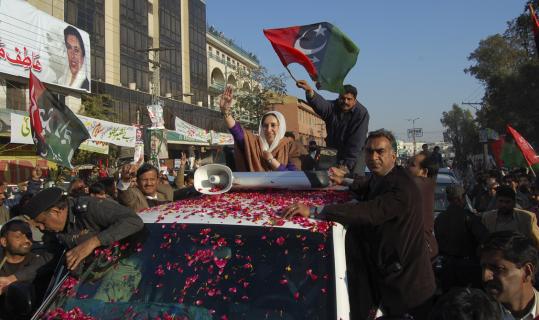 Benazir Bhutto waved as she arrived at her last public rally in Rawalpindi, Pakistan, on Dec. 27. British investigators ruled out that the head injury could have been caused by a bullet. (mohammad javed/Associated Press file)
Email|Print| Text size – + By Robert H. Reid Associated Press / February 9, 2008

ISLAMABAD, Pakistan - Benazir Bhutto's supporters yesterday disputed a Scotland Yard finding that a bomb not a bullet killed the former prime minister, and her party renewed its call for a full-scale international investigation into her death.

The British investigators' report, released yesterday after a 2 1/2-week investigation, concluded that Bhutto suffered a fatal head injury when the force of a blast from a suicide bomber hurled her against a lever on the roof of her armored vehicle.

British investigators ruled out that the head injury could have been caused by a bullet. Pakistan's government announced a similar conclusion shortly after Bhutto's killing, which occurred Dec. 27 at the end of a political rally in Rawalpindi.

Bhutto's party has insisted that the former prime minister was shot and suspects a government coverup because she had accused President Pervez Musharraf's political allies of plotting to kill her.

"We disagree with the finding on the cause of the death," said Sherry Rehman, spokeswoman for the Pakistan Party, who escorted Bhutto to hospital after the attack. "She died from a bullet injury. This was and is our position."

"This gives us all the more reason for a United Nations probe to know the perpetrators, financiers, sponsors and organizers of the this crime," she said. "We are looking for more than the hand that pulled the trigger."

The bomb site was hosed down within hours of the attack, removing any chance of a detailed forensic examination, and no autopsy was performed before Bhutto was buried.

Television pictures appeared to show a gunman firing a pistol at Bhutto as she waved to supporters from the vehicle's escape hatch moments before the blast. British investigators confirmed shots were fired but said they did not cause her death.

The report also concluded the attack was carried out by a single assailant who fired the pistol and detonated the bomb. There was speculation that two attackers were involved.

Musharraf invited Scotland Yard to help establish the cause of death after rejecting calls for a UN inquiry. A summarized report was issued yesterday by the British High Commission in Islamabad.

But the response of Bhutto's party suggested the British report alone would not calm the political storm surrounding her death as the nation prepares for the crucial Feb. 18 parliamentary elections, which were postponed for six weeks after her death.

"Far from easing the controversy surrounding Benazir Bhutto's death, this report is likely to stoke controversy," Farzana Shaikh, an analyst at the British think tank Chatham House, told Britain's news agency Press Association. "The investigation, however credible the findings may be, has taken place in a political context that is extremely complex."

"In my opinion Mohtarma Benazir Bhutto died as a result of a severe head injury sustained as a consequence of the bomb-blast and due to head impact somewhere in the escape hatch of the vehicle," British government pathologist Dr. Nathaniel Cary said in the report.