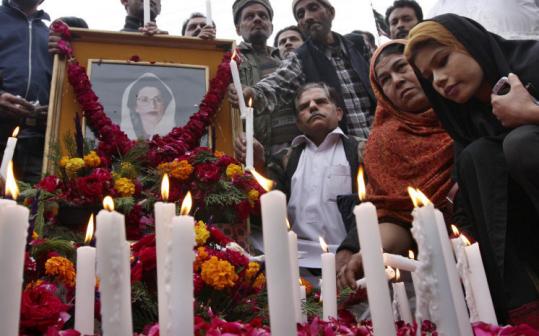 ISLAMABAD, Pakistan - President Pervez Musharraf yesterday met for the first time with Scotland Yard investigators looking into the assassination of opposition leader Benazir Bhutto and declared afterward that his government was committed to bringing her killers to justice.

The Pakistani president, who had initially described the British team's role as limited to forensic and technical assistance, appeared ready to grant them a wider scope of inquiry.

Almost from the time of Bhutto's death Dec. 27 in an attack by a gunman and a suicide bomber, there has been angry debate over whether the government was trying to cover up aspects of the case.

Bhutto's party has said repeatedly that it does not trust the government to carry out a fair investigation. Her husband, Asif Ali Zardari, said he believed that elements of Musharraf's administration might be complicit in her death and that, at the very least, officials were negligent in providing security for the 54-year-old former prime minister.

Musharraf has defended the handling of the probe, and has also said that Bhutto bore sole responsibility for her decision to stand up in her SUV and put her head and shoulders above the sunroof to wave to supporters as she left a rally in the city of Rawalpindi.

At a news conference last week, Musharraf said the Scotland Yard investigators, who arrived in Pakistan on Saturday, would not be allowed to go on "a wild goose chase" in looking into the circumstances of Bhutto's death. He described their role as a limited one in a probe that would largely be carried out by his own government.

The Pakistani leader "said that they were totally free to conduct their probe, and no one will interfere in their affairs," Cheema said.

A day after Bhutto was slain, the Interior Ministry caused an uproar by declaring that she was not hit by gunshots, but rather struck her head against a lever on the vehicle's sunroof, and that the blow's force was greatly magnified by the shock wave from the bomb.

In the days that followed, still photographs and video images surfaced that clearly showed a gunman firing at Bhutto from a few feet away, and her appearing to collapse back into the vehicle before the explosion hit.

The government has blamed Islamic militants for carrying out the assassination. Bhutto, who was leading her party in elections that were to have taken place yesterday but are now scheduled for Feb. 18, was seen as pro-Western and had pledged to forcefully confront the militants if she won.

In London, Bhutto's 19-year-old son, Bilawal Bhutto Zardari, told a news conference that the United Nations should conduct an investigation.

"We do not believe that an investigation under the authority of the Pakistani government has the necessary transparency," said Zardari, who after the assassination was named ceremonial head of his mother's Pakistan People's Party, with his father serving as a kind of regent.