US will review aid to Pakistan 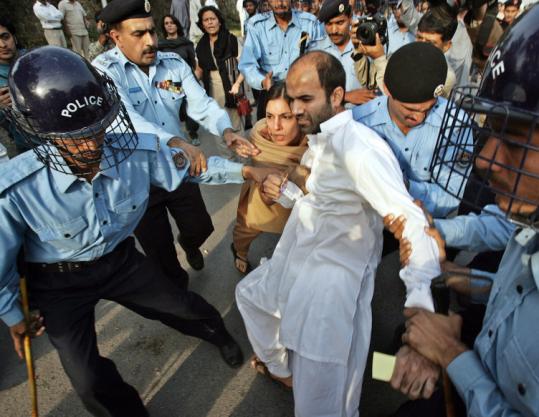 WASHINGTON - The United States will review billions of dollars worth of financial assistance to Pakistan following President Pervez Musharraf's decision to suspend the constitution and declare a state of emergency, Secretary of State Condoleezza Rice said yesterday.

Rice, who was traveling in Jerusalem yesterday, spoke as Musharraf pursued a second day of arrests of hundreds of opposition leaders, lawyers, and supreme court judges in what Pakistani newspapers described as a "coup" against his own government.

Rice told reporters that the crackdown might trigger legal statutes that would make Pakistan ineligible for some of the aid that has flowed into the country over the past five years. But she also suggested that President Bush would be very reluctant to cut off military support for Musharraf, a military ruler who has become a crucial partner in the war on terror.

"We have to be very cognizant of the fact that some of the assistance that has been going to Pakistan is directly related to the counterterrorism mission," Rice said.

Yesterday, senior White House and State Department officials appeared to be struggling to weigh their options as a key ally in one of the most dangerous regions in the world tightened his grip on power with increasingly authoritarian measures and faced the risk of an eruption of massive civil unrest.

"There is still this faint hope that this martial law will last only a day or two, but . . . I think we're kidding ourselves," Senator Joseph Biden, a Delaware Democrat who is chairman of the Senate Foreign Relations Committee, told CBS's "Face the Nation" yesterday.

Biden, who is also a presidential candidate, said he received an administration briefing Saturday night. He said the administration did not appear to have a plan to respond to the crisis. "I don't know that they have any notion of what they're going to do right now," he said.

Musharraf, a general who took power in a bloodless military coup in 1999, became a close US ally after the Sept. 11 terrorist attacks. Pakistan, which had supported the Islamic fundamentalist Taliban regime in Afghanistan, reversed its position and supported the US move to remove the Taliban from power.

In exchange, the United States has provided more than $10 billion in funding. About $6.2 billion has gone to reimburse Pakistan's military for the costs associated with stationing 100,000 Pakistani troops on the Afghan border to curb Al Qaeda and the Taliban, according to Craig Cohen, deputy chief of staff at the Center for Strategic and International Studies, a Washington-based national security think tank.

Cohen, who produced a study on US funding to Pakistan, said he doubts that US officials will be able to curb this funding, no matter what Musharraf does.

"I have a hard time envisioning that the administration is going to walk away from providing military assistance to Pakistan because they see that as vital in continuing Pakistan's cooperation in the war on terror on the border and that remains America's priority," he said. "There is probably going to be tough talk about continuing the aid, but I think when push comes to shove, many are going to argue that if we want continued cooperation against Al Qaeda and the Taliban, then military assistance has to continue."

But other funding to Pakistan could be in jeopardy. Musharraf's government is one of only a small handful in the world to obtain direct budget support, including Israel, Egypt, and Jordan. Since Sept. 11, 2001, Pakistan has received $1.6 billion in direct cash transfers, with little oversight and few limitations on how the money can be spent.

Pakistan also received $1.6 billion in US foreign military aid to purchase American weapons, such as F-16s and ship-to-ship missiles, and $1.1 billion in humanitarian assistance. Analysts say that billions more in covert US assistance to Pakistan's intelligence agencies flow into the country.

Musharraf's popularity plummeted earlier this year when he tried to remove the chief justice of the Supreme Court. He has also been under fire for his handling of an extremist insurgency inside his country. Some US officials say he has done too little to find Osama bin Laden and other Al Qaeda leaders, while many Pakistanis accuse him of turning Pakistan's military against its own citizens.

Until now, US officials have been reluctant to criticize Musharraf, preferring instead to quietly nudge Pakistan toward gradual democracy by supporting the holding of parliamentary elections in January and successfully pushing Musharraf to allow the return of exiled former prime minister Benazir Bhutto.

But Musharraf's decision to declare a state of emergency Saturday night, just as the supreme court was deciding whether or not he has a right to continue to hold public office while simultaneously serving as chief of the army, has toughened the US stance.

Daniel Markey, who until this year was on the State Department's policy planning staff, met with top aides to Musharraf a week ago and they told him they were afraid that the supreme court would issue a series of rulings to keep Musharraf from continuing to serve in government, a move that they said would have jeopardized their plans for a gradual transition to democracy and thrown the country into chaos. "They believed their capacity to manage it was slipping away," he said.

Yesterday, the US Embassy in Islamabad issued a statement urging the release of arrested lawyers, human rights activists, and politicians and allowing the resumption of independent television broadcasting, which has been blacked out in recent days.

"Such extreme and unreasonable measures are clearly not in Pakistan's best interest," the statement said.

Rice said yesterday that Pakistan's parliamentary elections "need to take place on time, which would mean by the beginning of the year."

But Prime Minister Shaukat Aziz told reporters at a press conference yesterday that elections could be delayed by "up to a year" because of the state of emergency.

He justified the measures by saying they were to "ensure the right of the government to maintain law and order and security, to contain extremism, and to bring harmony amongst the various pillars of the state - pillars being the executive, the judiciary, and the legislature."

Although Musharraf used "extremism" to justify the crackdown, more than 400 moderate, secular opposition leaders have been detained or targeted for house arrest, including Javed Hashmi, acting chief of former premier Nawaz Sharif's party, activist Asma Jahangir, and Imran Khan, a famous cricket player who has become a politician. Lawyers announced that they would launch a national strike today.

Hassan Abbas, a former aide to Musharraf who is now a scholar at Harvard University, said Pakistanis were rallying around the justices of the supreme court, seven of whom were fired Saturday.

"For the first time in the history of Pakistan, there is some institution that has gained so much popularity and credibility that they are a threat to the military," he said.

Yesterday, Bhutto spoke out against the wave of arrests, which she said encouraged extremists, but she refused to rule out a power-sharing arrangement with Musharraf. "I agree totally with General Musharraf that Pakistan is on the verge of destabilization," she told CNN. "I agree with the diagnosis, but I don't agree with the cure. General Musharraf has given supporters and sympathizers of the militants a new lease of life."

Despite the widespread criticism of Musharraf's actions, analysts said they doubted that Bush, who puts a premium on personal relationships and loyalty, would take away too much US support.

"We have hitched our wagon to General Musharraf and I don't know how we begin to back out without it being a foreign policy disaster," said Chris Mason, a former State Department official who is now at the Center for Advanced Defense Studies, a Washington-based think tank.

"We have made promoting democracy in the Muslim world a cornerstone of our policy, and now one of our closest allies has come out of the closet as a military dictator. It is embarrassing to say the least."