Critics want the US to target production 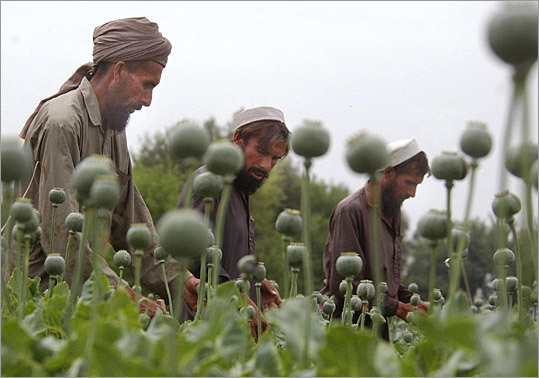 IMAM SAHIB, Afghanistan—It's here, somewhere. Tucked among the dusty storefronts of this town, a secret laboratory reprocesses opium into heroin that is then shipped north to Tajikistan and on to Russia, Europe, and the United States.

The location of the laboratory in Imam Sahib is secret because, like the estimated 61 other heroin factories in northern Afghanistan that produce the deadly narcotic, it operates with the compliance, and possibly the protection, of the warlords the US-led bombing campaign helped bring to power.

Authorities in Imam Sahib, in Kunduz Province, flatly assert that the local drug business dried up when the Taliban fled. But regional drug control officials say the war on terror has not only failed to destroy the illegal narcotics trade, it has inadvertently helped restore it to the levels that preceded the Taliban's ban on poppy cultivation in 2000, when Afghanistan produced 75 percent of the world's opium supply. And privately, people in Imam Sahib acknowledge that here, "they do the works of the white powder."

Antinarcotics officials criticize the US-led campaign in Afghanistan for targeting terrorism but not the trade that helps to create both the instability and the income upon which terror groups thrive. That is a contradiction, drug control analysts in the region say, that will continue to undermine Afghanistan and the governments of Central Asia.

"Members of the anti-Taliban coalition say that they are fighting against terrorist organizations in Afghanistan and that, unfortunately, fighting drugs is not a priority," said General Rustam Nazarov, the head of Tajikistan's Drug Control Agency. "This is unfortunate, because I know that terrorism and the drug trade are two parts of one evil."

Much of Afghanistan's opium and heroin travels to Europe, where the street value of a pound of heroin reaches $30,000, via the 682-mile frontier with Tajikistan. Nazarov said Afghan heroin laboratories stamp their products with trademarks that often boldly display their names and points of origin. Major Avaz Yuldashev, Nazarov's aide, produced a 2-pound bag recently at the agency's headquarters in the Tajik capital, Dushanbe. The bag bore a scorpion-shaped insignia with the words, in Afghan Dari, "Imam Sahib, quality guaranteed."

Hamid Karzai, the Afghan president, has vowed to stamp out opium production, but the UN has already termed his campaign to ban poppy farming "largely a failure." On Friday, the UN's drug control office predicted that Afghanistan would produce more than 3,700 tons of opium this year, dwarfing last year's 185 tons. The country produced a record 5,070 tons of opium in 1999, the office said.

The Karzai government offered farmers $500 an acre to destroy poppies when, according to UN estimates, that same acre can earn a poppy farmer $6,400 annually. In some Afghan districts, poppy farmers mined their fields to prevent troops from destroying crops.

Karzai's own government includes rumored drug barons. Haji Abdul Qadir, a vice president who was gunned down in Kabul in July, was reputed to be eastern Afghanistan's main drug lord. Leaders of the Northern Alliance, the US-backed coalition that helped defeat the Taliban, now control the defense and interior ministries - and, drug analysts say, the illegal narcotics trade in the north.

The Taliban's poppy ban never extended to Badakhshan Province, the one part of Afghanistan the Northern Alliance controlled throughout the latest civil war. According to Tamara Makarenko, a specialist on Central Asia at the University of Glamorgan in Wales, opium poppies were cultivated in 6,071 acres of Badakhshan farmland in 2000. The figure rose to 15,664 in 2001. Now, opium cultivation in Badakhshan occupies 32,110 acres. "The trade will not disappear, given that people in the current Afghan administration continue to profit from it," Makarenko said.

International drug control officials refuse to name names. But privately they say that every major warlord and every provincial governor in northern Afghanistan is involved. "Look at anyone who is wealthy, and ask yourself, what in Afghanistan produces wealth, other than drugs and smuggling," said one official, who spoke on condition of anonymity.

A US official in Dushanbe acknowledged that it was important to fight the drug trade, "because of the sense of lawlessness it creates." However, he said, "our immediate concern in the region has been the antiterror effort."

If the people the United States helped put in power are involved in the drug trade, this complicates the US-led war on terror. "The drug business is not the main source of income for terrorism, but it is a source of income," said Antonella Deledda, the regional representative of the UN Office for Drug Control and Crime Prevention, who is based in Tashkent, Uzbekistan.

Narcotics officials broadly hint that the 10,000 Russian-commanded border troops who guard the Tajik-Afghan frontier play a part in the trade. "Whatever the Russians confiscate at the border, the drugs are put on military planes and flown to Moscow," said one regional official.

Lieutenant Colonel Pyotr Gordiyenko, a spokesman for the Russian troops in Dushanbe, denied this allegation, saying his comrades are the ones doing the most to prevent the drug trade. Over the past six months, Russian and Tajik border guards in Tajikistan have arrested 27 Afghan drug runners and killed three others, he said.

Nazarov was asked about allegations linking General Abdul Rashid Dostum, the ethnic Uzbek leader who controls much of northern Afghanistan, and Amir Latif, the governor of Kunduz province, to the drug trade. He smiled.

He was asked whether Tajik officials were involved and whether Russian border guards played a role. He smiled again. "We know their names," he said.