Alliance that drove out Taliban unraveling 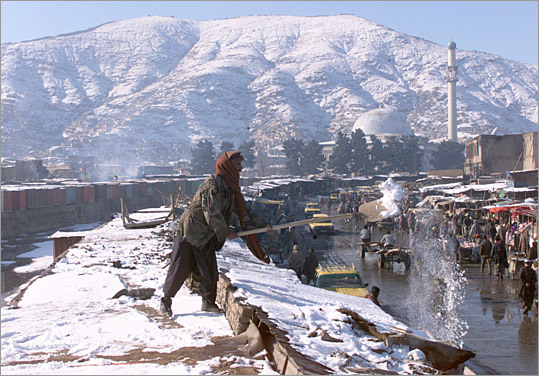 SHOLGARA, Afghanistan—They fought together as the Northern Alliance, the US-backed force that drove the Taliban out of Afghanistan and whose leaders formed the backbone of the country's new government.

Over the past week, that coalition has come unraveled in northern Afghanistan. The two main militias that once made up the Northern Alliance have turned on each other in a series of bloody clashes that have left more than 40 dead and dozens wounded.

Unlike the battle between two Pashtun factions around Gardez in southeastern Afghanistan, the conflict in the north goes straight to the top of the country's interim government by pitting proteges of the country's two senior defense officials against each other.

Officials in the northern cities of Mazar-e-Sharif and Kunduz have rushed to calm fears that the country's leading commanders, rid of the Taliban enemy that briefly united them, have turned on each other to settle old scores and grab territory.

That would be the worst-case scenario for Afghanistan, and could lead to a return to the infighting that wrecked Afghanistan after the Soviet Union withdrew its army in 1989. This could also further complicate the work by US forces to root out remaining Al Qaeda and Taliban members.

In Sholgara, a mountain town 40 miles southeast of Mazar-e-Sharif and one of several places in the area that saw heavy fighting last week, local authorities fear the worst.

"This is the beginning of civil war, like 10 years ago," said Haji Gul Ahmad, deputy security commander of Sholgara, whose underfunded and outmanned police force of 30 men watched helplessly as armed gangs shot it out in the town center. "The government in Kabul cannot do anything about this."

Such stark pronouncements are rare in Afghanistan, where officials, fearful of scaring away international organizations that provide much-needed aid, try to play down the severity of the tensions. One official, Sodaqi, who came from Mazar-e-Sharif to help mediate the crisis here, admonished Gul Ahmad for talking openly to a visitor.

"Why are you telling him the truth?" Sodaqi told Gul Ahmad in Afghan Dari, unaware that a translator was listening.

Turning to the visitor, Sodaqi added: "Everything is OK, the situation is normal, there is no more conflict. Please tell people to send us humanitarian aid."

As he spoke, a burst of machine gun fire rattled outside Gul Ahmad's compound, followed by another report down the street.

The standoff in Sholgara, like others across much of the north, is a battle between the Jumbish-e-Millie group belonging to General Abdurrashid Dostum, the ethnic Uzbek warlord who is now the country's deputy defense minister, and the Jumbiat-e-Islami, led by Defense Minister Mohammad Fahim and commanded in the north by Ustad Mohammad Atta, both ethnic Tajiks.

In November, Dostum's and Atta's troops combined with a third militia of ethnic Hazaras to capture Mazar-e-Sharif from the Taliban. Relations among all three have been tense as each group has since sought to take control of areas lost to the Taliban.

Two weeks ago, the simmering rivalry between the Jumbiat and the Jumbish boiled over into open warfare in the farming town of Qala-e-Zal in Kunduz province, near the Tajikistan border.

It took six years for two former Northern Alliance commanders - Tulah, who is loyal to the Jumbiat, and Nabi, who is supported by Dostum's Jumbish - to drive the Taliban out of their hometown of 30,000. But it took only a couple of months to realize that the town was not big enough for the two of them.

Fighters fired their Kalashnikov assault rifles across nebulous front lines along the Kunduz River, which cuts through the town. Machine gun fire rattled the main street. Truck-mounted antiaircraft guns on both sides blasted away at opposing troops, trucks, and buildings.

The fighting abated after two days when Nabi's force retreated to Dostum's stronghold in Balkh province, where Nabi is said to be planning a return to Qala-e-Zal. In the meantime, fighting has also broken out in Sholgara, and in Dawlatabad, north of Mazar-e-Sharif, and Chimtal to the west.

Dostum's recent appointment to the interim government was widely seen as an effort by Prime Minister Hamid Karzai to win the support of the powerful Uzbek leader who rules a wide swath of northwestern Afghanistan as his personal fiefdom.

This war-splintered country has seen a dramatic increase in factional fighting since the Taliban regime was driven from power late last year by US bombs and opposition forces.

In the southern Paktia province, ethnic Pashtun warlord Badsha Khan prepared for another assault today on the city of Gardez, where local tribal leaders are rejecting his authority as governor. Fighting there last week killed at least 61 people, sent thousands of residents fleeing, and forced Khan's troops to retreat into the surrounding mountains.

Interim foreign minister Abdullah, who like many Afghans uses only one name, said last week in New York that the UN-sponsored peacekeeping force that patrols only the capital city, Kabul, should be allowed to work throughout the country and should be expanded from its current 5,000 troops to 20,000.

But even a force that big would find it tough to calm a country where as many as 700,000 residents are armed, and where the leaders of armed gangs often have scores to settle. US troops in Afghanistan do not participate in the peacekeeping mission and have refused to get involved in factional disputes.

Despite his rise to power in Kabul, Dostum has not acted on the international community's request to withdraw his heavily armed militia from villages and towns. Nor has Atta, the rival commander in the north. Over the past few days, the two militias have increased their presence in Mazar-e-Sharif, resulting so far in a few tense standoffs but no shooting.

"But with this high concentration of troops the situation could turn into all-out warfare any time," said a diplomat in Mazar-e-Sharif who has followed the conflict closely.

Authorities are supposed to be disarming militias and collecting arms. In Kunduz, some commanders have handed in their weapons and disbanded their militias, said Khalidin, the region's deputy governor and a former Jumbish commander who has sent his former force of 500 men home.

But in Sholgara, the tension and fighting continue.

"Two men are responsible, General Dostum and Atta Mohammad," said Gul Ahmad, the Sholgara security commander. "If they want this conflict to end, it will end. If they do not want it, there will be more fighting between their commanders."

As he spoke, a burst of machine gun fire shook the street. Another gun responded a few hundred yards away.

Last week, Atta's people arrested 300 Dostum men. Atta, who spent yesterday in talks with Dostum's representatives, refused to be interviewed for this story, but his aides said that the commander had sent 700 men to Sholgara. Forces loyal to Dostum have set up roadblocks outside the town to stop them.

Residents of this farming town - many live in caves because their homes were destroyed by fighting - had thought war was finally over when the Taliban fled in November.

"We need international peacekeepers," Abdul Fatah, deputy governor of the district around Sholgara, said as another machine gun rattled in the distance.

The deteriorating situation in Qala-e-Zal is typical across much of Kunduz province.

Despite years of feuding, Nabi and Saifullah, a former Qala-e-Zal governor, brought their militias together against the Taliban. Two days after the Taliban left town in November, Nabi, known as "Nabi the goat" for his long beard, killed Saifullah and declared himself the sole ruler of the town.

Another commander, Tulah, inherited Saifullah's 500-man force and tried to split control of the town. But Nabi's men tried to take over Tulah's stronghold in the town bazaar and launched an attack on his house.

Neither commander is popular among the people, said Nabi, a young shopkeeper who has the same name as the warlord.

"We don't care who was fighting," Nabi said. "We thought there would be no more fighting after the Taliban left. Now, no one knows what will happen next."