KUNDUZ, Afghanistan—orthern Alliance commander Hanon sat silently at the hearth of his boyhood home in the town he fought so hard to liberate from the Taliban, waving the Polaroid picture he had just taken with his younger brother, Ghulam Sarvar.

The Taliban presence was still here in Kunduz, in the living room of Hanon's house, sitting right next to him on the carpet. But it was OK. It was just his little brother.

"I fought for the terrorists," Ghulam Sarvar said with the kind of smile that warriors often flash in war-stricken lands. "I was one of the Taliban."

Hanon, 36, responded with the kind of reassuring look that big brothers often give their little brothers. He knew the Taliban had pressed Ghulam Sarvar into service to punish his parents for having a son who was a Northern Alliance commander. The two men, who had fought each other so bitterly, now embraced warmly.

The only sound as more than 30 family members crowded the living room was the flap-flap-flap as Hanon waved the picture so it would dry more quickly.

The story of Hanon, who like many Afghans uses one name, helps explain how mass defections rather than battlefield victories brought about the Taliban's speedy collapse in northern Afghanistan.

When the Northern Alliance captured Kunduz on Sunday after a two-week siege, its troops arrested as many of the 6,000 foreign mercenaries who fought for the Taliban as they could.

Aware that the extremist militia had forced brothers to fight against each other on front lines, the US-backed alliance did not even try to disarm thousands of Afghans who had fought on the Taliban side.

But the quick reconciliation in northern Afghanistan also raises many questions. How easy would it be for brother to turn against brother again? Who should pay for the Taliban's many abuses? And, in a city still bursting with gun-toting men, how does one distinguish former Taliban fighters from their former enemies?

The answer to these questions in Kunduz is that no one cares. Amid the wreckage of tanks that once guarded the entry to the city, several dozen armed men were waiting for a local commander to arrive. All wore the flat brown hats and brown woolen blankets typical of the ethnic Tajiks who fight among the Northern Alliance troops.

Some of these men were victorious Northern Alliance fighters who had just entered Kunduz. But most were Taliban fighters who switched sides when the city fell.

"They made us go to the front," said one of the men, Mahommad Anvar, who stood as a friend among his former foes, armed, like them, with a Kalashnikov assault rifle. "They sent me to fight, but in return, they didn't touch my family."

But Dlagha, one of the men who fought under Commander Hanon as the alliance chased the Taliban westward toward Kunduz, said Mahommad Anvar was lying.

"He said they forced him, but he was a volunteer," Dlagha said. "A lot of those guys are former Taliban."

But it no longer matters.

"We are all the same now," said Anvar. "We're Afghans, we're brothers."

Alliance leaders say there is a tactical reason for the smooth assimilation of former Taliban fighters. An estimated 3,000 armed Taliban fighters are holding out in the mountain village of Char-Dara, 6 miles west of Kunduz.

US warplanes are bombing the position daily. But the alliance hopes that if they learn that Afghans who defect are treated well, they will end their resistance, said Abdul Kayum, an alliance commander in Imam Sahib, 20 miles north of Kunduz.

"We are treating the Taliban well, feeding them, letting them walk around freely, giving them clothes and bedding," Abdul Kayum said. "We have forgiven them."

But have they forgiven him? Some of the former Taliban lurking near Abdul Kayum's home did not look that way. The men still wore the black turbans and robes and long beards of Taliban fighters. They glared malevolently as Abdul Kayum strode by.

Hanon's brother Ghulam Sarvar - who like many Afghans doesn't know his exact age but believes he's in his 20s - has tried harder to blend in. When the alliance marched into town, Hanon, fearing reprisals against former Taliban fighters, instructed his little brother to shave.

The Taliban summoned Ghulam Sarvar for military service in 1998, after its forces captured Kunduz and its spies found out that Hanon was fighting with the Northern Alliance.

"They demanded that our family either pay a $400 fine or give another son to fight against the brother," he said.

The punishment did not end when Ghulam Sarvar went to the front. Three times, the Taliban arrested Hanon's father, Abdul Satar. Each time, they held him in jail for a month and beat him. The militia raided the family's home for rice. And Taliban fighters collected the fine anyway.

Ghulam Sarvar fought for the militia for three years, often on the other side of the front where Hanon was fighting. But Ghulam Sarvar only wanted to talk about the way his service as a Taliban soldier ended.

"For the last few weeks, the Americans dropped cluster bombs on us all the time," he said. "We would duck and hide, but they bombed us so often that we couldn't lift our heads from our trenches. The Americans broke the spirit of the Taliban."

The foreign mercenaries who were part of the Taliban - Pakistanis, Arabs, Chechens, and others - were the biggest threat, Ghulam Sarvar said. They only spoke to Taliban commanders. If any of the rank-and-file tried to leave the field of battle, the foreigners shot them.

"Many were killed who wanted to leave," Ghulam Sarvar said as he flapped another Polaroid picture. "I did not dare try to escape."

The fall of the Taliban regime in Kunduz does not mean the war is over for this family. Hanon has photographs of Pakistani mercenaries he took from a prisoner. He has pledged to kill them if he ever sees them. On Thursday, Hanon left for Char-Dara, to fight the remnants of his brother's former comrades-in-arms.

But the war between the brothers ended when Kunduz surrendered and Hanon and Ghulam Sarvar embraced in their parents' house.

"We cried so much, we were so happy to see each other," Hanon said Thursday, recalling the reunion. "In wars, people die. We didn't know if we would see each other again."

Here, the two fighters hugged and laughed, as they flapped their pictures, and a US warplane dropped bombs on the Taliban fighters outside the city. 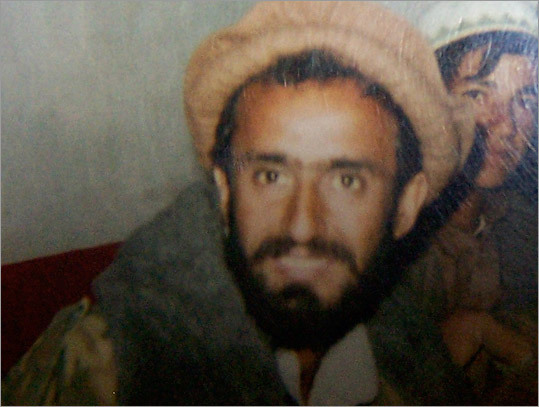 (David Filipov) Photo of Abdul Hanan taken by a reporter and shown to his brother.
Your comment is subject to the rules of our Posting Policy
This comment may appear on your public profile. Public Profile FAQ