Behind a burka, woman struggles in a war zone 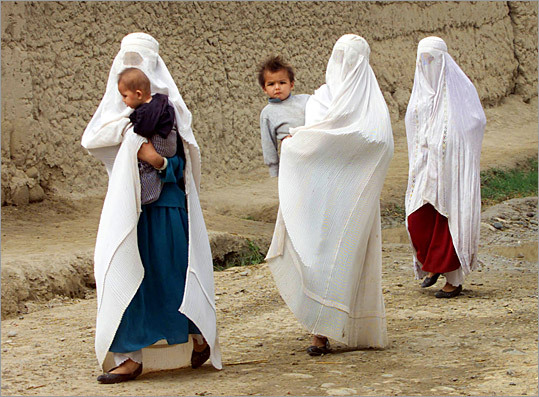 DASHTI QALA, Afghanistan—Nargiz threw down the bowl of carrots she had been peeling and ran across the hay-strewn courtyard after her screaming children.

The wave of explosions that shook the ground, the windows, everything, told her the American B-52s were bombing the Taliban front lines again. The roar from 24 huge bombs detonating just 2 miles away had frightened her 2-year-old boy, Zaid, and her youngest girl, Zamzama, 5.

The children had heard the sound of warplanes bombing nearby many times before. But it is something that small children have trouble getting used to. As they always do during an air raid, Zaid and Zamzama tried to run away as the violent sound rattled the mud brick compound.

It is never easy being a mother on the front line. But it is even harder when your children make a dash for the doors of a compound that strict Islamic laws forbid you to leave without the burka, the body covering that women are required to wear here.

Then again, nothing has been easy for Nargiz, 29, since war forced her to move to this rural part of northeast Afghanistan, where strict interpretation of Islamic laws is tradition and where a woman is little more than a prisoner-servant for her husband.

In a rare interview with a Western reporter that was carefully arranged with her husband, Nargiz shed light on the claustrophobic life behind the burka. She spoke of the challenges and the loneliness she faces as an independent-minded woman in a society where women have no independence.

Opening up gradually as the interview went on, she told of the difficulties of sharing her husband with his first wife. She spoke about the constant fear of living on a front line with children. And she described how her life had changed for the worse after the Tali ban took control of her native Kunduz province three years ago.

Suddenly, she was forbidden to work as a teacher of the local Dari language in a girls' school. Under the Islamic militia's puritanical interpretation of Islamic law, women do not study or work. And when they go out - which happens rarely - they must wear their burkas or face corporal punishment.

"Before the Taliban came there was no custom of wearing the burka in Kunduz," Nargiz said in her compound, after her husband, Mahbuhbullah, agreed to leave her alone in their courtyard with a reporter and translator - a remarkable concession for a man to make in this society.

"I almost never wore one before," Nargiz said. "In Kunduz women are very free."

Northeastern Tarkhar province, where Dashti Qala is located, is not like Kunduz. Although controlled by the opposition Northern Alliance, local leaders share the Taliban's repressive views about women. Nargiz now has a white burka that she wears whenever she goes out - which is rarely - to go to the market.

"People in this area are very strict," she said. "I wonder why they are so strict. In Kunduz, some families are very free and others are very strict. You could wear one by choice."

The burka makes choosing a husband a difficult process. In northeastern Afghanistan, a girl's parents show her the pictures of prospective suitors. Nargiz saw her husband in the flesh before agreeing to marry him. For the right to marry Nargiz, Mahbuhbullah paid $12,000 to her parents, in this impoverished society a sign of her worth and his wealth.

That was seven years ago. Mahbuhbullah already had a first wife, Najiba, who is now 31, but he only brought her to live with Nargiz two months ago. Like Nargiz, Najiba has four children by their husband. The two help out with chores, but they are not close.

Afghan custom allows a man to have up to four wives. But sharing a husband, Nargiz said, "is very troublesome for me."

"Sometimes I become impatient and angry because he has two wives," she said. "I never argue with her. I neither like her nor dislike her. Before I was jealous, but now I'm not."

Najiba refused to be interviewed. Or at least that is what Mahbuhbullah said.

It appears that Nargiz is the favorite of the two. She has two rooms, while Najiba has only one. And Mahbuhbullah sleeps with Nargiz. That is not enough to prevent Nargiz's attractive features from darkening when Najiba is mentioned one time too many.

"I want to go to her room at night and strangle her," Nargiz said.

In the cold detente of their shared household, the two mothers share the duties of taking care of their eight children. That became an extra challenge last year, when the Taliban pushed the Northern Alliance back to Dashti Qala, putting their home on the front line.

A Taliban air raid killed over 200 people last year. Two months ago, the Taliban struck again, dropping bombs nearby. Luckily, no one was hurt.

"I was working around the house when the plane came," Nargiz recalled. "I took my children's hand and ran inside the house. We had no other way to protect ourselves."

And now, B-52s carpet bomb Taliban positions 2 miles away. Mahbuhbullah, the children's' father, proudly states that his kids "have forgotten to fear."

"My children are very afraid of planes," Nargiz said. "When the planes come, they run and try to hide. My husband explains to them they are friendly planes and I tell them they should sit quietly while the plane is killing their enemy."

"It is very difficult for us," she said. "Since the bombardments started, we've been sleeping in the basement. Children are especially afraid of the planes. They cry and try to run away."

Nargiz would love to take her family and leave Afghanistan. But where would they go? Pakistan is closed for refugees, and Tajikistan, just 2 miles away, is closed, too.

Nargiz is afraid for her four brothers who remain in Kunduz, under the Taliban. She has not heard from them in a year. She has no friends here - all the wives of her husband's friends quietly accept the strict rules she chafes under.

"I don't like them," she said. "They come over but I don't go to their houses. When we meet, I speak about being free that I wish I could have freedom. They say just get used to these rules."

Sometimes she turns to her husband. Mahbuhbullah is as understanding as men are in this society, which is to say, not very.

"I often yell at him," Nargiz said. "Sometimes I tell him I was free in my province and here I am in such a strict situation. And he tells me, 'you should tolerate it.' "

And sometimes the mud brick walls and ceiling and floors close in on a woman who wants to be free in a place where she cannot.

"Sometimes housework on the one hand, children on the other hand, and being under such strict rules make me mad," Nargiz said, emotion ringing in her rich voice. "Sometimes I'm alone and I beat my face with my hand."