Irregulars face Taliban and hope for US troops

ZARTKAMAR, Afghanistan—The drawing on the wall of the partially bombed-out front-line base of anti-Taliban troops is simplistic and childish: a tall building and two jets.

As renditions of the attacks on the World Trade Center go, this one would get few points for expressive flair. But the location of the drawing speaks volumes.

As the soldiers of the opposition Northern Alliance pick their way through mine fields amid the ruins of mud-brick huts, the drawing of jets flying into a building reminds them of the larger meaning of their fight against the Taliban and Osama bin Laden's Qaeda network.

"We have been fighting the Taliban and the terrorists for five years," said Daud, one of the commanders of the rebel base who like many Afghans uses a single name. "But now we are the ground troops for America. This is now their fight, too."

The US military might object to the idea that these ragtag irregulars are American soldiers. Washington refrains from giving full backing to the Northern Alliance, comprised mainly of ethnic Tajiks and Uzbeks and other minority groups. But it is easy to see why these men consider themselves fighters for America.

For three days this week, US jets bombed the Taliban's front-line positions on the strategic heights of Mount Qala-Kata, a few hundred yards from Daud's lines along Afghanistan's border with Tajikistan.

Those Taliban troops are all that is stopping Daud's men from advancing along the road to Taloqan, the heart of Takhar Province, 20 miles to the south. Three times since Sept. 11, the rebels have tried and failed to take the mountain.

Daud's men believe the US air strikes here could make the difference if the alliance prepares to launch an offensive on Taloqan and other Taliban-held cities. They were happy to see this week's air raids. They had been expecting them since just after Sept. 11, when their commanders told them about the attacks on America.

"We were told that terrorists had hijacked planes and blown up a big American building and the US defense ministry," Daud said. "We were told planes would come and that we should stay in our trenches and not shoot at those planes. We were told that these would be American planes. The planes of our friends. Our planes."

It took more than a month for those planes to arrive. And when they finally struck on Sunday, Monday, and Tuesday, they missed the main Taliban forces on Mt. Qala-Kata.

"The American bombs fell at the bottom of that hill," Daud said, peering over a mud-brick wall. "You see their trenches at the top?"

"See their trenches at the top?" Daud continued. "Well, that's what they need to hit."

Up there, along a line of stone fortifications, Taliban vehicles skirted the summit, too far for Daud's lightly armed men to hit. An opposition battery several miles behind the front line fired in a vain attempt to hit the vehicles. Daud's men - a hodgepodge of Tajik, Uzbek, Pashtun, and Hazari farmers who were chased out of neighboring Kunduz by the Taliban two years ago - argued about what kind of gun it was.

"We actually don't know one gun from another from another," said Daud. "We're not really professional soldiers."

On a smaller mountain on the opposition side of the front, Daud's men had placed a few dummies in trenches to attract enemy fire.

"We need American ground forces to fight alongside us," said Mirzarahim, another alliance commander at the front. "They will go in the front, and we will be there with them."

A fighter named Nasriddin voiced a common complaint of Northern Alliance fighters, that they are getting little support from the United States.

"I want the Americans to bomb more," he said. "Just tell them to bring lots of US planes."

Then he paused, considered the 200 yards between his position to the Taliban lines, and added, "Please tell the US pilots not to miss." 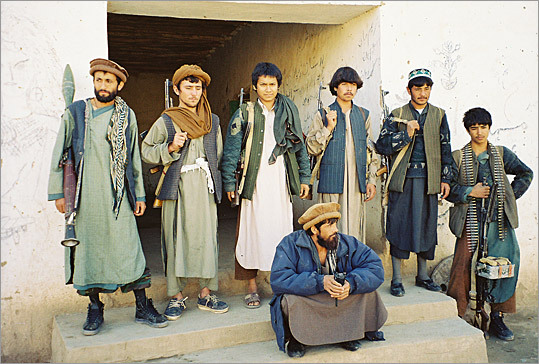 Commander Daud (center) with his fighters.
Your comment is subject to the rules of our Posting Policy
This comment may appear on your public profile. Public Profile FAQ