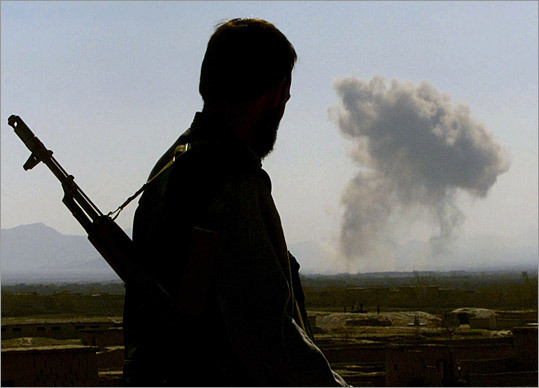 DASHTI-QALA, Afghanistan—Children sang, joyful villagers cheered, and opposition fighters smiled yesterday, as waves of US warplanes launched their heaviest bombardment to date on the front-line positions of the ruling Taliban near Afghanistan's border with Tajikistan.

A group of children on a mud-brick wall sang a chorus of "Airplane, airplane!" Women peered through their veils as a warplane streaked through the sky. Men pointed and smiled as a US jet swooped toward the Kokcha River, flying just under the high, thin clouds.

The jet launched its attack on Taliban positions two miles away, then performed a victory roll as smoke billowed from the ground, bringing cheers from the crowds of supporters of the opposition Northern Alliance in Dashti-Qala, as another US warplane circled in. For the ethnic Tajik and Uzbek farmers here, victims of deadly Taliban air raids last year, this was payback time.

The most intense US attacks on Taliban front lines in northeastern Afghanistan took place as the Northern Alliance prepared for what commanders said was an imminent major offensive on the capital, Kabul, and two other strategic northern cities. Troops in full battle gear and trucks bearing heavy weapons moved toward the front in anticipation of an offensive on the Taliban stronghold in the regional capital of Taloqan.

"We have been ordered to bring our heavy weaponry to the front: new ammunition, tanks, rockets, machine guns," said Faiz Mohammad, a fighter in an elite group of Northern Alliance commandos.

A force of 800 commandos took up positions on the outskirts of Kabul to join in a planned attack.

In the Northern Alliance stronghold of Kishim, 35 miles east of Taloqan, opposition troops at a radio base passed on orders to prepare for an attack to commanders on the front. They said Alliance Defense Minister Mohammed Fahim had given the order to take Taloqan and the northern city of Mazar-e-Sharif by the beginning of the Muslim holy month of Ramadan, which is scheduled to begin Nov. 17.

The attack would come from key alliance strong points in Far khar and Kalafghan to the south of Taloqan and from Dashti-Qala and Khojagar in the north, according to Abdulaq, the commander of the radio base.

There were more signs that the Northern Alliance, whose forces were driven out of Kabul in 1996, was ready to launch its first coordinated offensive against the Taliban since the United States began its air campaign to flush out bin Laden and his network.

Over the weekend, three opposition commanders - ethnic Uzbek warlord Abdul Rashid Dostum, Tajik commander Ustad Atta, and Shiite Muslim leader Ustad Muhakik - agreed on a plan for a multipronged assault on Mazar-e-Sharif, which lies astride vital supply routes to Kabul and has a strategic air field.

In anticipation of the offensive, opposition troops stepped up security checks on the few navigable roads in Northern Alliance territory, stopping and searching the four-wheel drive vehicles that are the only automobiles capable of negotiating the tortuous rutted dirt paths. At the checkpoints, alliance fighters said they were checking for Taliban infiltrators.

The tense atmosphere among the security troops contrasted with the holiday mood in Dashti-Qala during the nearly two-hour US airstrike against the Taliban. This town of 50,000 residents also shelters some 40,000 Uzbeks and Tajiks who fled Taliban troops.

People here harbor bitter memories of the Taliban offensive that turned their town into a front-line outpost. Taliban aerial bombardments over the past two years have taken 500 lives in Dashti-Qala alone, according to Amidullah, an opposition fighter based in the town. Once it would have been suicide to stand on the road overlooking the Kokcha River, where the Taliban used to bombard Dashti-Qala from their bases.

"For two years we were under the Taliban bombing," said Gulmohammad, one of a crowd of Dashti-Qala residents who lined streets to watch the bombardment. "Now they are feeling the bombs. We are very happy."

As he spoke, another US jet roared in from the east, dropping a bomb on the Taliban front on the west bank of the Kokcha River before circling back for another run. Bursts from a Russian-made Zenit antiaircraft gun failed to harm the jet, but indicated that Taliban air defenses on this front were still intact. An alliance fighter named Babakhan radioed opposition headquarters to report where the bomb had landed. Two young children waved yellow US food aid packets, dropped here by a military plane overnight Monday, as the smoke rose from the Taliban lines in the village of Qala Kata.

On his radio, Amidullah said, he had heard Taliban troops requesting donkeys from their rear lines to carry away their dead.

Once again, opposition commanders complained that the US raids were not heavy enough.

"There are 300 Taliban posts here, and the Americans have destroyed three," said Mahmur Hassan, governor of Dashti-Qala and commander of about 6,000 troops on the front lines here. "They are trying to bomb over a wide area, and it just is not effective. There is no coordination."

As the alliance prepared for its offensive, one anti-Taliban group in western Afghanistan said it was running out of ammunition.

The forces of western warlord Ismail Khan, who ran the ancient city of Herat until the Taliban ousted him in 1995, was trying to capture the town of Qala Nau, 90 miles northeast of Herat. Another group of Khan's fighters was 15 miles outside Herat, but they were unable to mount an attack because of a lack of munitions.

"We are facing a shortage of weapons and other resources to launch an attack," said Seyyed Nasir Ahmed Alavi, Khan's spokesman.