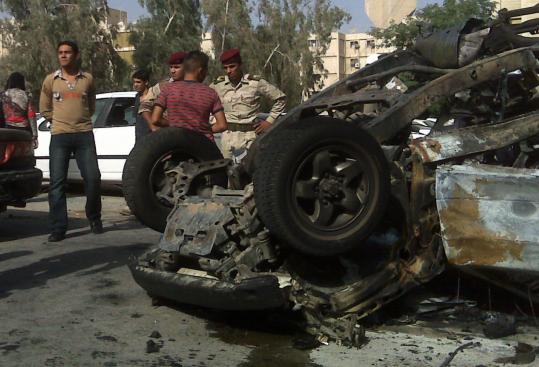 This Iraqi Defense Ministry vehicle was destroyed earlier this week by a magnetic bomb that had been affixed beneath it. Iraqi insurgents are increasingly using ''sticky IEDs'' to assassinate government officials. (ERNESTO LONDONO/WASHINGTON POST)
By Ernesto Londono Washington Post / October 10, 2008
Text size – +

Rigged with magnets so they will adhere to the undersides of automobiles and detonated by remote control or with timers, the bombs have been used in Iraq sporadically since 2004.

This year, US military officials said, they have investigated roughly 200 cases involving magnetic bombs, and Iraqi officials said they have noted an increase in assassination attempts in which attackers use guns equipped with silencers.

These assassination attempts mark a shift from mass-casualty attacks that triggered a backlash against insurgent groups and militias, US military officials said, and come as the Iraqi government is asserting more control over security matters in the country and as the United States starts to reduce troop levels.

US and Iraqi officials did not release comparative data on the use of magnetic bombs in recent years. But Iraqi officials say the increased use of the weapons led them this year to warn all government employees to inspect their vehicles each morning and to avoid leaving cars unattended in unsecured areas.

Even when they are not responding to emergencies, Iraqi army and police officials drive through Baghdad with sirens blaring to avoid getting stuck in traffic, which is when the bombs are sometimes affixed.

Al Qaeda in Iraq "and other terrorist groups attempt to spread fear and intimidation among the public by use of these brutal tactics and try to create the perception that the Iraqi government is incapable of protecting local citizens," said a senior US military intelligence official, speaking on the condition of anonymity.

Although US military officials said magnetic bombs have not been placed under their vehicles, many American officials have begun to inspect their cars, even inside the heavily protected Green Zone.

Major General Abdul Karim Khalaf, a spokesman for the Ministry of Interior, said "most of the attacks are against MOI officials, because this ministry started to become professional and we are targeting all kinds of outlaws."

Khalaf said police recently detained 12 people suspected of carrying out assassinations using guns fitted with silencers, and have launched operations to target networks that use such weapons. "In the last three weeks, there's been a huge amount of activity with these kinds of operations," he said.

Before heading to work Tuesday morning, Ali Jabar Aduan got down on one knee to check the chassis of his car for explosives. Later that day, a sticky IED - or improvised explosive device - turned the government-owned Kia sport sedan he drives into a ball of charred metal.

Aduan, 30, a driver employed by the Defense Ministry, said he drove cautiously through Baghdad's chaotic, traffic-choked streets Tuesday morning, looking right and left out of fear that someone might slip a magnetic bomb under his car.

A tan-colored armored Iraqi army truck was parked in the same lot, a few feet from Aduan's car.

As Aduan prepared to cross the street, he heard a thundering blast and saw a cloud of smoke billow from the army truck.

About five minutes later, a second, more powerful blast overturned and set aflame Aduan's sedan, startling the crowd that had gathered near the burning armored truck. Aduan, a father of two, stared in disbelief at the burning vehicle.