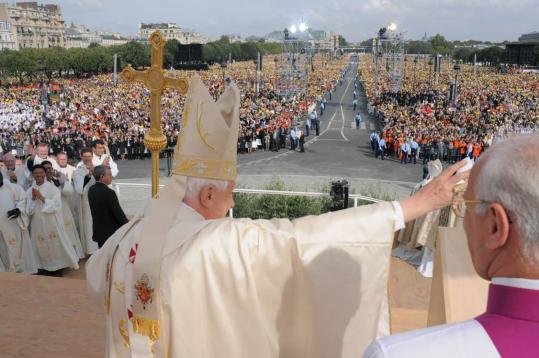 Pope Benedict XVI waved during an outdoor Mass yesterday at the Esplanade des Invalides in Paris. After the Mass, he traveled to Lourdes to drink from a spring famed for its cures. (Osservatore Romano/Reuters)
By Frances D'Emilio Associated Press / September 14, 2008
Text size – +

LOURDES, France - As millions of pilgrims do each year, Pope Benedict XVI drank water yesterday from the Lourdes spring famed for miraculous cures as he visited a grotto at the sanctuary he calls a "citadel of hope."

A young girl in 19th-century peasant costume handed the pontiff a glass of the water from the spring that burst through the ground 150 years ago when a local girl, Bernadette Soubirous, had repeated visions of the Virgin Mary.

The grotto sheltered Benedict from a steady rain but didn't keep out the evening chill as the pontiff, in a red mantle over white robes, prayed, and lighted a candle.

Benedict flew to Lourdes, a town in southwest France near the Pyrenees, after saying an outdoor Mass in Paris. The service at the Esplanade des Invalides was attended by more than a quarter-million Roman Catholics - a joyous display of faith in a traditionally Roman Catholic country that has witnessed a sharp decline in churchgoing in recent years.

In his homily in Paris, Benedict focused on the ills of modern materialism, condemning the unbridled passion for power, possessions, and money.

"Has not our modern world created its own idols?" Benedict said, wondering aloud whether people have "imitated, perhaps inadvertently, the pagans of antiquity?"

The main purpose of Benedict's first visit to France as pontiff was the pilgrimage in Lourdes as the shrine marked the 150th anniversary of the apparitions of the Virgin Mary to 14-year-old Bernadette, who later was made a saint.

Riding through Lourdes in his popemobile, the pontiff smiled and waved to cheering crowds of pilgrims wearing windbreakers. In drizzle and chilly wind, the 81-year-old pope walked the final stretch to the grotto.

More than 5 million people visit Lourdes every year - some brought to the spring in wheelchairs and stretchers - in hopes that drinking and bathing in the water will heal their ailments. The church has officially recognized 67 miracle cures linked to Lourdes over the years.

The pope has said that miracles are not the real point, but faith.

"We don't go to Lourdes looking for miracles," he said en route to France. "The love of the mother [Mary] is the true healing."

In the grotto, Benedict stood on the spot where his predecessor, John Paul II, had prayed four years earlier.

The pope's Mass in Paris earlier in the day evoked themes dear to John Paul II, who worried that the affluent West was turning consumerism into a kind of religion and ignoring its Christian roots.

"This is a question that all people, if they are honest with themselves, cannot help but ask," Benedict said in his homily in the French capital, renowned for its luxury goods, fashion sense, and cultural riches.

"Have not money, the thirst for possessions, for power and even knowledge, diverted man from his true destiny?" the pope asked.

Benedict blasted modern society's thirst for these new "pagan" idols as a "scandal, a real plague."