US plans $1b aid package for Georgia 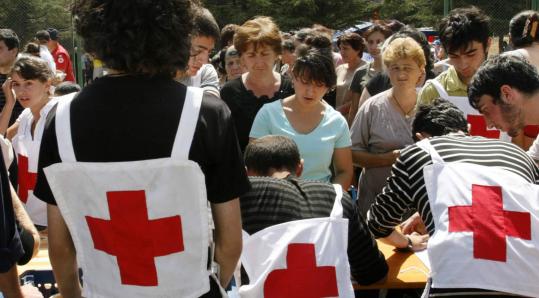 Refugees got a meal in a refugee camp in Gori, Georgia, yesterday. The United Nations refugee agency said Tuesday that 4,200 people had fled villages near South Ossetia to the nearby city of Gori because of harassment by marauding militias. (Shakh Aivazov/Associated Press)
By Steven Lee Myers New York Times News Service / September 4, 2008
Text size – +

BAKU, Azerbaijan - The Bush administration plans to announce a $1 billion package of aid to help rebuild Georgia after its rout by Russian forces last month, administration officials said yesterday, as Vice President Dick Cheney arrived in the region to signal support for Georgia and other countries neighboring Russia.

The aid, along with Cheney's visit, is sure to increase tensions with Russia, whose leaders have accused the United States of stoking the conflict with Georgia over its two separatist regions by providing weapons and training to the Georgians.

President Dmitri A. Medvedev and Prime Minister Vladimir V. Putin have also complained that humanitarian supplies delivered by the American Navy and Air Force since Russian forces routed Georgian forces and occupied parts of the country were a disguise for delivering new weapons.

Administration officials have dismissed those accusations as baseless.

The aid package, which is expected to include money for rebuilding Georgia's infrastructure and its economy, was scheduled to be detailed in Washington later yesterday by Secretary of State Condoleezza Rice, the official said. President Bush is also expected to release a statement.

It is not clear whether the package will include any direct military support, which officials have acknowledged they are considering. The aid package reflects an intensification of the administration's support for Georgia, though Bush and his senior advisors have yet to settle on any punitive actions against Russia.

Cheney arrived yesterday in Azerbaijan on the first of three stops in the region the Russians consider their "near abroad" in what one of his aides last week described as an effort to bolster countries in the face of their more assertive neighbor.

Cheney is scheduled to visit Georgia today, followed by Ukraine.

While Cheney's plans to visit Azerbaijan and Georgia were made before Russia's military operation in Georgia, the trip took on added significance following the conflict, which began on the night of Aug. 7, when Georgian forces tried to seize control of South Ossetia, only to be driven back when Russian forces poured into the country.

Although a cease-fire ended the fighting, Russian forces have still not withdrawn from parts of Georgian territory near South Ossetia and another breakaway region, Abkhazia.

Russia last week recognized both as independent countries, a move that has failed to win any international backing.

Azerbaijan, like Georgia, is a former Soviet republic that has sought closer ties to the West and the United States, and it is considered a vital crossroads for oil and gas from the Caspian Sea.

Underscoring the point, Cheney's first meetings here in Baku were with representatives of two international oil companies: William Schrader of Azerbaijan and Robert Satmalchi of Chevron, according to a spokeswoman, Megan M. Mitchell.