Vacant synagogue a sanctuary against war 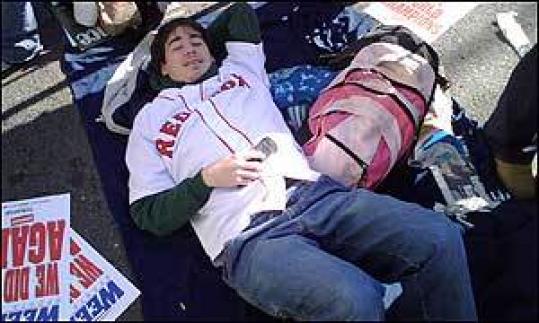 TSKHINVALI, Georgia - When Georgian rockets began falling on this sleepy capital of the breakaway province of South Ossetia, Zemfira Tibilova and her neighbors ran to a century-old brick synagogue.

During four days of fighting in the town, she said, four dozen Orthodox Christians hid in the building's dark basement with little food and water.

When the Georgian Army launched an offensive late on Aug. 7 seeking to regain control of the region, about 50 people on Tskhinvali's Shaumian Street - mostly women and children and several elderly men - grabbed all the bread and water they could carry and took refuge in the synagogue.

It has largely stood empty since nearly all 2,000 of Tskhinvali's Jews fled in 1991 during a war in which South Ossetians won de facto self rule, although the building is occasionally used by a Christian group.

All but 17 of South Ossetia's Jews left during the earlier conflict, mostly going to Israel or Russia, and all but one of those fled during the recent war, the American Jewish Joint Distribution Committee says. The one remaining Jew, a 71-year-old woman, apparently sought shelter elsewhere.

With the fighting over and Russian troops in command after defeating Georgia's army, people living near the synagogue worked on rebuilding damaged homes yesterday and restore a sense of normalcy to Tskhinvali. Ossetians say the town's population is 30,000 but others put it at 10,000.

At one point during the fighting, adults huddling in the basement had to cup their hands around the mouths of terrified children to keep them quiet when Georgian troops arrived on a tank and walked up to the synagogue, they said. The soldiers moved on without going inside.

Limited to the few supplies they brought with them, the refugees endured thirst and hunger, but all survived.

About a block away, a row of houses was reduced to splinters and cinders by rocket fire. A rocket exploded in the synagogue's yard, shattering some windows but leaving the structure intact. The fragments of the exploded shell still lay on the ground yesterday.

"Only God helped us survive these four nights of hell and suffering," said Angelina Valiyeva, a 44-year-old border official, who sought shelter in the basement with her son, Garik, 9.

"I tried to support my mom and didn't cry," said Garik, whose father was killed in the fighting.

Valiyeva and others said they tried to leave at one point during a lull in the rocket and artillery bombardment, but two Georgian snipers started shooting at them, forcing them to return.

They were crammed in a small space and slept on a heap of stones, cushioned by old clothing. A bucket became their toilet.

There was only one bed, and they gave it to Girsan Kukoyev, 77, because he is elderly and frail.

"All this time I prayed and God heard me. I and all those who hid here remained alive. It is a miracle that this building remained standing," Kukoyev said. "Temples are built exactly for that - for saving people."