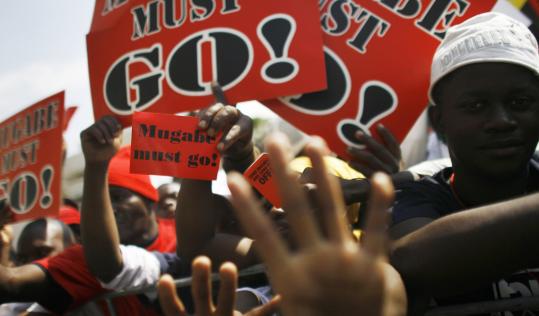 JOHANNESBURG - Zimbabwe's opposition leader has said he would accept the prime minister's post and concede the presidency - and command of the military - to Robert Mugabe to settle a political crisis in his country.

Morgan Tsvangirai outlined his proposal for resolving the contentious issue of who would lead any unity government in Zimbabwe in a speech Friday to regional Cabinet ministers gathered for the Southern African Development Community summit. The Associated Press obtained a copy of the speech yesterday, the day the summit opened.

Tsvangirai's proposal, which he said his Movement for Democratic Change presented during the deadlocked negotiations with Mugabe's ZANU-PF party, would mean a major curbing of the powers Mugabe has wielded since the country gained independence in 1980.

But it also would leave Tsvangirai working closely with a leader he has reviled as a brutal dictator.

President Thabo Mbeki of South Africa, who has been mediating Zimbabwe's power-sharing talks, spent much of the past week in Zimbabwe trying to push Mugabe and Tsvangirai to strike a deal.

The question of Mugabe's role has been a major sticking point, with the longtime president reportedly refusing to yield any power and his administration publicly mocking Tsvangirai's claim to have the mandate to lead Zimbabwe.

In his speech Friday, Tsvangirai said the two sides remain unable to agree on how powers would be divided between him and Mugabe.

A South African Cabinet minister involved in the talks, Sydney Mufamadi, said yesterday that a deal was close but said it was unclear whether a breakthrough would come during the summit.

Tsvangirai walked out of talks in Harare on Tuesday, but his chief negotiator said yesterday that the negotiations were back on track. "We're talking here," Tendai Biti said.

Tsvangirai said compromise is necessary because Zimbabweans would reject a deal "if any party is greedy."

"We have agreed that Mr. Mugabe will be president whilst I become prime minister," he told the SADC ministers. "We envisage that the prime minister must chair the Cabinet and be responsible for the formulation, execution and administration of government business, including appointing and dismissing his ministers. . . . A prime minister cannot be given responsibility without authority and be expected to deliver."

Tsvangirai, whose party won the most seats in Parliament in the March elections, is proposing that the president have no power to veto laws. The opposition also proposed that the president "shall be commander in chief of the defense forces of Zimbabwe," but exercise that power on the advice of the prime minister.

Tsvangirai won the most votes in a field of four in the first round of presidential voting in March, but not by the margin necessary to avoid a runoff against second-place finisher Mugabe. Tsvangirai withdrew from the June 27 runoff, citing attacks on his supporters by security forces and ruling party militants.

Mugabe held the runoff and was declared the overwhelming winner in a widely denounced poll. South African mediators helped guide Mugabe and Tsvangirai to sign a memorandum of understanding July 21 establishing a framework for negotiations.

Mbeki praised that agreement at the summit yesterday, saying the SADC would continue working "to help put Zimbabwe on the right road to its recovery."

But Botswana's president, Seretse Ian Khama, refused to attend the summit in protests against Mugabe's status there as head of state.

President Levy Mwanawasa of Zambia, who also has been critical of Mugabe, was hospitalized in Paris but said in a speech read by his foreign minister that the events in Zimbabwe were a "serious blot on the culture of democracy in our subregion."

Tensions over Zimbabwe come at a time when southern Africa is struggling to unify to fight poverty. SADC is to launch a free-trade agreement today that would scrap tariffs on 85 percent of goods traded among member nations.