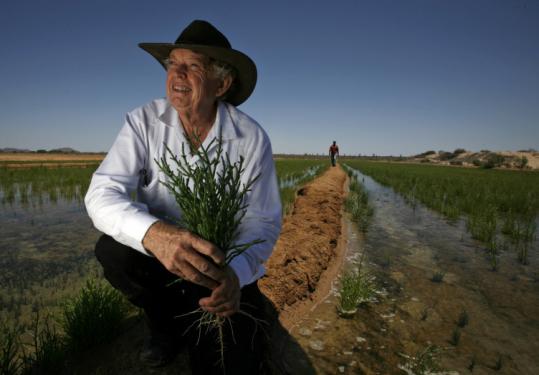 TASTIOTA, Mexico - A few miles inland from the Pacific Ocean, amid cracked earth and mesquite and sun-bleached cactus, neat rows of emerald plants sprout from the desert floor.

The crop is salicornia. It is nourished by seawater flowing from a manmade canal. And if you believe the American who is farming it, this incongruous swath of green has the potential to feed the world, fuel our vehicles, and slow global warming.

He is Carl Hodges, a Tucson-based atmospheric physicist who has spent most of his 71 years figuring out how humans can feed themselves where good soil and fresh water are in short supply.

The founding director of the University of Arizona's Environmental Research Lab, his work has attracted an eclectic band of admirers. They include heads of state, corporate chieftains, and Hollywood stars.

Here in the northern Mexican state of Sonora, he's thinking much bigger. He wants to channel the ocean into manmade "rivers" to nourish commercial aquaculture operations, mangrove forests, and crops that produce food and fuel. This greening of desert coastlines, he said, could add millions of acres of productive farmland and sequester vast quantities of carbon dioxide, the primary culprit in global warming.

Analyzing recent projections of ice melt occurring in the Antarctic and Greenland, Hodges calculates that diverting the equivalent of three Mississippi Rivers inland would do the trick.

Dennis Bushnell, chief scientist at the National Aeronautics and Space Administration's Langley Research Center, and other scientists say seawater agriculture could prove to be an important weapon in the fight against climate change.

All Hodges needs is $35 million. That's where salicornia comes in.

A so-called halophyte, or salt-loving plant, the briny succulent thrives in hellish heat and pitiful soil on a little more than a regular dousing of ocean water. Several countries are experimenting with salicornia and other saltwater-tolerant species as sources of food. Known in some restaurants as sea asparagus, salicornia can be eaten fresh or steamed, squeezed into cooking oil, or ground into high-protein meal.

Then oil prices exploded. Hodges saw his shot to lift his fleshy, leafless shrub from obscurity. That's because salicornia can be converted into biofuel. And, unlike grain-based ethanol, it doesn't need rain or prime farmland, and it doesn't distort global food markets.

Some environmentalists are dubious. Channeling millions of gallons of seawater inland could have unintended consequences for fragile deserts, said biologist Exequiel Ezcurra, a former head of Mexico's National Ecology Institute.

The biggest catastrophe, Hodges said, would be to do nothing in the face of climate change.