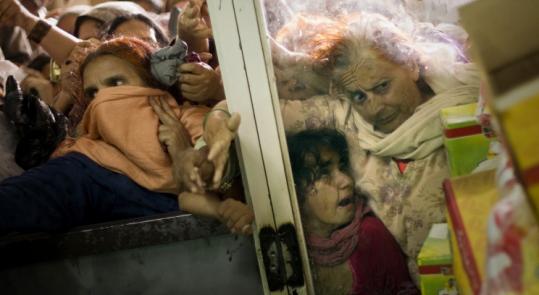 MEXICO CITY - If you're seeing your grocery bill go up, you're not alone.

From subsistence farmers eating rice in Ecuador to gourmets feasting on escargot in France, consumers worldwide face rising food prices in what analysts call a perfect storm of conditions.

Freak weather is a factor. But so are dramatic changes in the global economy, including higher oil prices, lower food reserves, and growing consumer demand in China and India.

But food protests now affect even affluent countries. While the price of spaghetti has doubled in Haiti, the cost of miso is soaring in Japan.

"It's not likely that prices will go back to as low as we're used to," said Abdolreza Abbassian, economist and secretary of the Intergovernmental Group for Grains for the UN Food and Agriculture Organization.

Eugene Thermilon, 30, a Haitian day laborer, can no longer afford pasta to feed his wife and four children since the price nearly doubled to 57 cents a bag. Their only meal on a recent day was two cans of corn grits.

In the long term, prices are expected to stabilize. Farmers will grow more grain for fuel and food and eventually bring prices down. Already this is happening with wheat; more crops will be planted in the United States, Canada, and Europe in the coming year.

However, consumers still face at least 10 years of more expensive food, according to preliminary FAO projections.

Among the driving forces are petroleum prices, which increase the cost of everything from fertilizers to transport and food processing. Rising demand for meat and dairy in rapidly developing countries such as China and India is sending up the cost of grain, used for cattle feed, as is the demand for raw materials to make biofuels.

What's rare is that the spikes are hitting all major foods in most countries at once. Food prices rose 4 percent in the United States last year, the highest rise since 1990, and are expected to climb as much again this year, according to the US Department of Agriculture.

As of December, 37 countries faced food crises, and 20 had imposed some sort of food-price controls. For many, it's a disaster. The UN's World Food Program says it's facing a $500 million shortfall in funding this year to feed 89 million needy people.

In Egypt, where bread is up 35 percent and cooking oil 26 percent, the government recently proposed ending food subsidies and replacing them with cash payouts to the needy. But the plan was put on hold after it sparked public uproar.

The increased cost of food staples in China threatens to wreak havoc.

Beijing has been selling grain from its reserves to hold down prices, said Jing Ulrich, chairwoman of China equities for JP Morgan. Inflation reached 7.1 percent in China in January, the highest in 11 years, led by an 18.2 percent jump in food prices.

Meanwhile, record oil prices have boosted the cost of fertilizer and freight for bulk commodities. - up 80 percent worldwide in 2007 over 2006.

The oil spike has turned up the pressure for countries to switch to biofuels, which the FAO says will drive up the cost of corn, sugar, and soybeans "for many more years to come."