Government puts off election set for next week 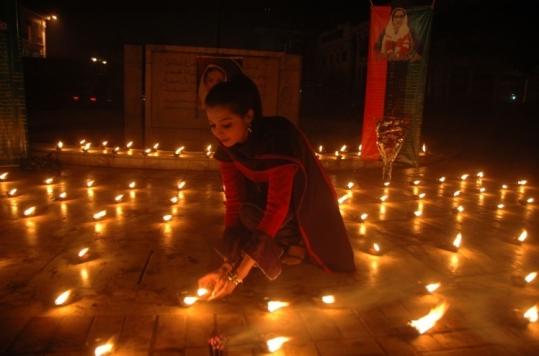 KARACHI - Opposition leaders yesterday debated whether to call mass street protests in response to a government decision to delay parliamentary elections that had been due next week, but are now planned for February.

Demonstrations are "not something we want to do. The country doesn't need more instability. It doesn't need more violence," said Sherry Rehman, spokesman for the Pakistan Party of assassinated former prime minister Benazir Bhutto. "We're going to use demonstrations as a last resort. But if we're pushed to the wall, that's what we have to do."

Proposals to put off the vote have provoked furor from the parties opposed to President Pervez Musharraf. They charge that Musharraf and his allies are using Bhutto's assassination Thursday as an excuse to avoid suffering a landslide defeat.

The election will determine the composition of the parliament and the new prime minister. The stakes are especially high for Musharraf because a new parliament could impeach him if opposition groups secure a two-thirds majority.

Officials at the country's Election Commission had been scheduled to officially announce the delay yesterday, but put off the statement until today, saying at the same time that damage from recent rioting made it logistically impossible to hold the vote on schedule next Tuesday. Officials gave no new date but said it would be after the Islamic holy month of Muharram, which ends Feb. 8.

Bhutto's Pakistan Peoples Party is set to meet today to formally decide whether to call supporters out to the streets in protest. If it does, there is a risk of resumed violence, just days after enraged Bhutto supporters went on a rampage in cities and towns across the country. The rioting caused tens of millions of dollars in damage, and left more than 50 people dead.

Tariq Azim Khan, spokesman for the major pro-Musharraf party, said security forces had been slow to react last week because they wanted to allow Bhutto supporters to vent their rage over her death. But he said that they would respond more forcefully the next time.

Khan blamed the rioting for the expected delay in the polls, saying that election commission offices were burned down and that people were made to feel afraid. "So long as that feeling persists," Khan said, "you can't expect a fair turnout, which is essential for any election to be meaningful."

Khan said the elections are likely to be postponed until February, but not later.

Opposition parties have said they fear the government will use the threat of political violence - ever-present in Pakistan - to delay the elections indefinitely.

"A postponement will create another rough patch for the country," said political analyst Ayaz Amir, who is running for parliament on a ticket led by former prime minister Nawaz Sharif. "Musharraf's group is afraid of the new mood sweeping the country, and they're looking for a way out."

Musharraf is due to address the nation tonight, and he is expected to offer reasons that the election should not go ahead as planned next week. He is also likely to discuss Bhutto's assassination, and aides say he may provide his answer to a rising chorus of demands for an internationally led investigation.

Bhutto was killed as she was leaving a rally in the garrison city of Rawalpindi. The gun-and-bomb attack was caught on tape, and images have been broadcast around the world of a well-dressed, clean-shaven man with sunglasses walking up to her vehicle and apparently shooting her at close range.

Police have released photos of the alleged gunman's head, which was recovered from the crime scene after the man apparently died in the suicide blast that followed his shots. Yesterday, they offered a reward for information leading to the man's identity.

Despite all the evidence, there is no consensus on how Bhutto died. The government said the day after the attack that she wasn't shot but hit her head on a sunroof lever amid the force of the explosion.

Government officials have since apologized for being crude in the way they described her death, but are sticking to their story.

Bhutto had been scheduled to meet hours later with US Senator Arlen Specter of Pennsylvania and Representative Patrick Kennedy of Rhode Island.

Senator Latif Khosa, a lawmaker from Bhutto's Pakistan Peoples Party, said she had planned to give the lawmakers a report outlining complaints on "pre-poll rigging" by Musharraf's government and the military-run Inter-Services Intelligence Directorate.

Khosa said he did not know whether Bhutto's killing was linked to her plans to release the document. Officials at the Information Ministry and the Interior Ministry declined comment. The government has denied charges of vote rigging and said it had nothing to do with Bhutto's death.

The dossier outlined several instances of electoral interference, including one case where an officer from the intelligence services sat nearby as an election official rejected nomination papers from opposition candidates, Khosa said. Another official stopped a candidate from filing his nomination in the southwestern Baluchistan Province, said Khosa, who wrote the report as head of the party's election team.

"The elections were to be thoroughly rigged, and the king's party was to benefit in the electoral process," he said.

The evidence was based on complaints by party candidates and information from sources in the security services, he said.

Since Bhutto's slaying, the government has come under harsh criticism for its security arrangements for her, its claim that an Islamic militant was behind her death, and its conclusion that it was the force of the blast and not gunshot wounds that killed her.

Her husband, Asif Ali Zardari, has led calls for an international, independent investigation into the attack.