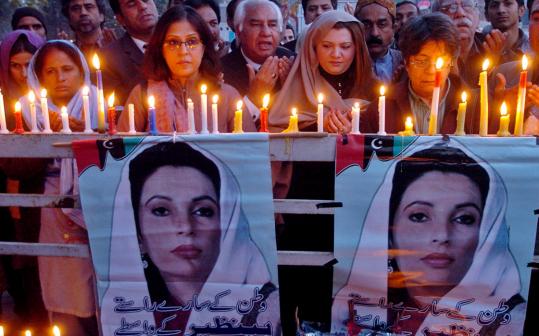 RAWALPINDI, Pakistan - Pakistani authorities have pressured the medical personnel who tried to save Benazir Bhutto's life to remain silent about what happened in her final hour, and have removed records of her treatment from the facility, according to doctors.

In interviews, doctors who were at Bhutto's side at Rawalpindi General Hospital said they were under extreme pressure not to share details about the nature of the injuries the opposition leader sustained in an attack here Dec. 27.

"The government took all the medical records right after Ms. Bhutto's time of death was read out," said a visibly shaken doctor who spoke on condition of anonymity because of the sensitivity of the issue.

The doctors now find themselves at the center of a political firestorm over the circumstances of Bhutto's death. The government has said Bhutto, 54, was killed after the force of a suicide bombing caused her head to slam against the lever of her vehicle's sunroof. Bhutto's supporters have pointed to video footage, including a new amateur video released yesterday, as proof that she was killed by gunfire.

The truth about what happened has serious implications in Pakistan. The ability of a gunman to fire at Bhutto from close range, as alleged by her supporters, would suggest that an assassin was able to breach government security in a city that serves as headquarters of the Pakistani military, bolstering her supporters' claims that the government failed to provide her with adequate protection.

If a gunman were to blame, it would also raise questions as to why the government has for days insisted otherwise. Bhutto's supporters have called for an international investigation.

The government has repeatedly dismissed allegations of a coverup, and some US medical specialists, when asked to review an official hospital description of her wounds, speculated that a skull fracture and not a bullet wound killed Bhutto.

A newly released video that was obtained by Britain's Channel 4 and broadcast yesterday cast doubt on the government's assertions and appeared to corroborate witnesses' stories. The footage appeared to show a gunman and a suspected suicide bomber approaching Bhutto's sport utility vehicle. Seconds later, the video showed gunfire and Bhutto's hair and scarf being blown back just as a bomb explodes.

Government officials identified Baitullah Mehsud, a pro-Taliban commander in the restive South Waziristan region, as the organizer of Bhutto's killing. But some observers said the government has been too quick to blame the attack on the Taliban.

Jameel Yusuf, a lead investigator in the 2002 disappearance of American journalist Daniel Pearl in Karachi, said the Pakistani government had blundered badly by not sealing off the crime scene. Moments after Bhutto was killed, workers hosed down the blood at the blast site before any evidence could be collected.

"When you're dealing with a murder of this nature, you need to have forensics," Yusuf said.

Several witnesses say they have yet to be interviewed by police.

Kamran Nazir, 19, was badly injured at the rally by shrapnel. Yesterday, he was at Rawalpindi General, his father at his bedside. His breathing was labored, and the top layer of skin on his face was singed off. He said he was shocked that police had not questioned him.

"Why is no one asking me what happened?," he said as his father's eyes watered.

"The truth is, there really is no investigation at all," said Babar Awan, a top official in Bhutto's Pakistan Party who said he saw Bhutto's body after the attack and identified two clearly defined bullet wounds - entry and exit points. He said that the principal professor of surgery at the hospital, Muhammad Mussadiq Khan, was "extremely nervous, but eventually told me that Bhutto had died of a bullet wound."

"He told me firsthand he was under pressure not to talk about how she died," Awan said.

Reached at his home in Islamabad, Khan declined to comment, saying he worked for a government hospital and was trying to "do my duty and remain a doctor." Over the weekend, Athar Minallah, a board member at Rawalpindi General, e-mailed journalists Bhutto's medical report. The report, which was separate from documents that doctors say have been confiscated, describes a deep wound in Bhutto's head that was leaking brain matter.

No "foreign body" was found in the wound, the report says, and no exit wound was recorded. But in an X-ray of Bhutto's skull, the doctors identified "two to three tiny radio-densities." Minallah said in an interview that the report suggested those were bullet fragments.

US medical specialists said the "radio-densities" were probably not bullets.

Thomas Scalea, physician in chief of the shock trauma center at the University of Maryland Medical Center, said that while there was no evidence of a bullet wound, he was also perplexed by how the blunt force of Bhutto's head against an object could have caused brain damage severe enough to kill her so quickly.

"The whole thing strikes me as very unusual," Scalea said.