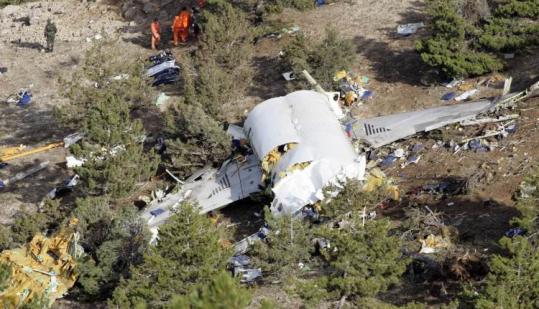 ISPARTA, Turkey - Investigators are hoping the recovery of flight data recorders will shed light on what caused a Turkish domestic airliner to crash yesterday, killing all 57 people on board.

The death toll rose to 57 because a baby on the plane had not been counted. Officials said all on board were Turkish.

Tuncay Doganer, chief executive of Atlasjet Airlines, said the aircraft had no known technical problems. He said weather conditions were normal, but snow and fog are common on higher ground in Turkey during the winter.

Ali Ariduru, head of Turkey's civil aviation authority, said there were no indications of terrorism or sabotage. The area where the plane crashed is not a traditional stronghold of a Kurdish rebel group fighting for autonomy from Turkey.

The 165-seat, MD 83 jet was manufactured by McDonnell Douglas.

It crashed in mountains in southwestern Turkey before it was due to land in the city of Isparta on a flight from Istanbul.

The crash occurred near Keciborlu, a mountain town about 7 miles from Isparta's Suleyman Demirel airport. Atlasjet said the site is about 5,000 feet high, and rescuers initially had difficulty reaching the wreckage because of the rugged terrain.

Transport Minister Binali Yildirim said regular inspections had been carried out on the plane, which had been leased by Atlasjet from the Turkish-based World Focus Airlines.