Car bombing in Nigeria kills 18 at UN base 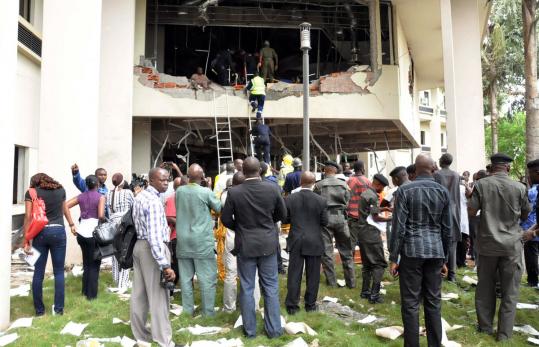 Rescuers worked yesterday in the debris of the UN headquarters in Abuja, Nigeria. Below, an injured man was rescued. (Henry Chukwuedo/AFP/Getty Images)
By Adam Nossiter and Senan Murray New York Times / August 27, 2011

ABUJA, Nigeria - A suicide bomber rammed his vehicle packed with explosives into the UN headquarters yesterday, destroying several floors in a thunderous blast that killed at least 18 people, witnesses and officials said.

Boko Haram, a shadowy Nigerian Islamist insurgency group with possible links to Al Qaeda’s affiliates in the region, claimed responsibility for the attack in a telephone call to the BBC. If confirmed, it would signal a significant leap in the scope of Boko Haram’s focus, which until now had taken aim exclusively at domestic targets as part of an ill-defined aim to establish strict Islamic law in the country’s north.

The Nigerian government has come under repeated attack by Boko Haram in the north and by militants in the south. Foreign oil companies and their workers have also been a common target of southern insurgents, who demand a greater share in the nation’s oil profits. But the deadly strike on the United Nations, the first on its offices in Nigeria, was a surprising turn.

“This act provides a new dimension to threats on the domestic front,’’ said Joy Ogwu, Nigeria’s ambassador to the United Nations, who called the attack a “transnational crime’’ and urged renewed efforts to fight terrorism in her country.

If indeed the work of Boko Haram, the attack lends substance to new concerns of officials and analysts that an inward-looking organization is increasingly adopting the methods and aims of global terrorists. The bombing, capping months of small-scale explosions and assassinations, mostly in the country’s north, is the most brazen attack yet.

“The logic of Boko Haram has been essentially inward looking,’’ said Chidi Anselm Odinkalu of the Open Society Justice Initiative, in Abuja. “To now seek to attack the UN entirely departs from the narrative they have so far constructed. That’s the most worrying thing about this. It makes Boko Haram an international threat.’’

In recent years, UN offices have been the targets of lethal attacks in Iraq, Algeria, and Afghanistan, and although the bombing was unprecedented for Nigeria, it did not come as a total surprise. UN officials said the organization had boosted security at all its buildings in Nigeria in the past month after receiving information that it could be a Boko Haram target.

Twenty-six UN agencies, including the UN Development Program, UNICEF and the UN Population Fund, maintained offices in the building, which is near the US Embassy. As many as 400 people may have been inside at the time of the attack, and the death toll was expected to rise, officials said.

Adebayo Jelil, a building security guard, said that he saw a big SUV-like vehicle drive through the exit gate of the building, head straight for reception area and explode. He said at least three floors of the seven-story structure were heavily damaged, with walls blasted away and cables and rods protruding.

“The UN headquarters in Nigeria has been shattered,’’ said Adeyemo Andronicus Adebayo, a Nigerian Red Cross official who was at the scene. “You see littered bodies, blood,’’ he said, adding, “It was the worst devastation.’’

Casualties were being ferried to the national hospital nearby. The hospital put out an appeal for blood on local radio.

The UN secretary-general, Ban Ki-moon, denounced the bombing, as did the Nigerian government, which called it an “an assault on global peace and security.’’ Ken Saro-Wiwa Jr., an aide to President Goodluck Jonathan, said Boko Haram was now “the priority item,’’ while President Obama said the “attack on Nigerian and international public servants demonstrates the bankruptcy of the ideology that led to this heinous action.’’

The precise nature of that ideology is in some doubt. Boko Haram rarely states its aims beyond calling for a stricter imposition of the already existing, loosely applied Islamic law in Nigeria’s northern states, and suggesting a rollback in democratic institutions.

But the attack is in keeping with a marked increase in the group’s sophistication. Analysts point to its growing use of improvised explosive devices and overseas trips by its members, possibly for training, as evidence that Boko Haram is getting international help, possibly from Al Qaeda in the Islamic Maghreb.

“What’s really alarming is the level of planning and organization that has gone into it,’’ said Dr. Jibrin Ibrahim, of the Center for Democracy and Development, an Abuja research group.