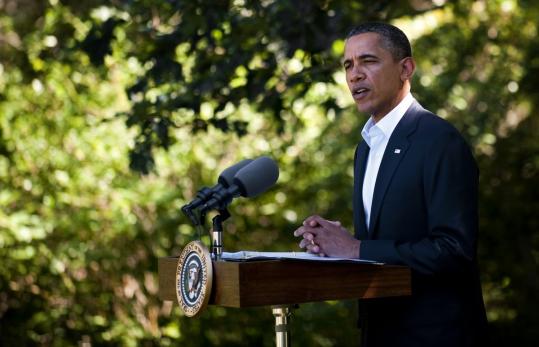 TISBURY - President Obama said yesterday the United States is prepared to aid Libyan rebel forces in a peaceful transition to democracy, and he urged opposition forces to refrain from reprisals that could undermine the rapid advances that drove strongman Moammar Khadafy into hiding.

“Your courage and character have been unbreakable in the face of a tyrant,’’ said the president, who spoke from the lawn of his Martha’s Vineyard vacation compound, Blue Heron Farm, and directed his remarks to Libyans. “The Libya that you deserve is within your reach.’’

He called on Khadafy to relinquish his claim to leadership and order his remaining loyalists to lay down arms.

Obama’s declaration came after a five-month NATO air bombardment - which Obama backed, despite critics who warned of involvement in an Arab quagmire - that helped the rebels move toward wresting control from the North African leader.

Obama has been receiving regular briefings from national security advisers during his vacation. Yesterday, he convened a meeting of his National Security Council on a secure conference call. He also spoke with Prime Minister David Cameron of Britain, who confirmed the United Kingdom’s commitment to helping foster democracy and stable institutions in Khadafy’s wake.

Obama said the NATO-led coalition plans to use $30 billion in frozen Khadafy regime assets to help build a new government, led by the rebels’ Transitional National Authority, and that he would seek United Nations backing for efforts to build a democratic government.

But he also issued a warning: “Above all, we will call for an inclusive transition that leads to a democratic Libya,’’ he said. “True justice will not come from reprisals and violence. It will come from reconciliation and a Libya that allows its citizens to determine their own destiny.’’

The erosion of Khadafy’s regime provides a measure of vindication for the president and others who supported his approach of airstrikes on regime forces, including Massachusetts Senator John Kerry, an early and outspoken advocate of the strategy. Some fellow Democrats had argued that Obama should not involve the United States in a civil war with no clear exit strategy. The president also was criticized by some Republican lawmakers, including John McCain of Arizona and Lindsey Graham of South Carolina, who said he did not act forcefully enough.

Some GOP presidential candidates, meanwhile, who had voiced a range of criticism of the administration’s game plan yesterday applauded the rebel advances without endorsing US strategy.

“The world is about to be rid of Moammar Khadafy, the brutal tyrant that terrorized the Libyan people,’’ said former Massachusetts governor Mitt Romney, who has asserted Obama did not act forcefully enough in Libya but who also raised questions in New Hampshire last month about Obama’s desire to oust Khadafy.

Although the situation remained volatile and uncertain yesterday, Khadafy’s removal from power would represent a second high-profile victory for the administration’s national security team. Three months ago, American Navy Seals killed Osama bin Laden in a daring raid on his Pakistan hideout.

Obama’s statement on the Blue Heron Farm lawn yesterday provided a positive diversion from the political and economic problems besetting his administration. His popularity dipped to its lowest level last week in the polls, while joblessness remains above 9 percent in an economy that is struggling to rebound from the 2008 recession.

In his statement, Obama recounted what the United States and its international partners have done to boost the rebel operation against Khadafy: helping shape sanctions imposed by the UN, leading the initial wave of airstrikes against the regime, and helping cut off Khadafy’s access to guns and cash.

Obama said that the international community has been working for months with the Transitional National Council to prepare for a post-Khadafy government. He said US diplomats will continue to work with the rebel council to ensure that existing state institutions and the rights of Libyans are protected.

“In that effort, the United States will be a friend and a partner,’’ Obama said, without providing specifics. “We will join with allies and partners to continue the work of safeguarding the people of Libya.’’

The president also recognized the families of Americans who lost their lives in terrorist attacks that the United States and Britain have determined were planned and funded by the Khadafy regime. In 1988, a Libyan terrorist blew up an airliner over Lockerbie, Scotland, killing 270 people, nearly 200 of them Americans, including 13 Massachusetts residents and 10 other New Englanders.

“Today we remember the lives of those who were taken in those acts of terror and stand in solidarity with their families,’’ Obama said.

The president has tried to maintain a vacation schedule since arriving on Martha’s Vineyard Thursday, but aides say he has been spending large blocks of time on Libya and the economy. After delivering his statement yesterday, he went to Oak Bluffs Elementary School to play basketball with aides and friends.