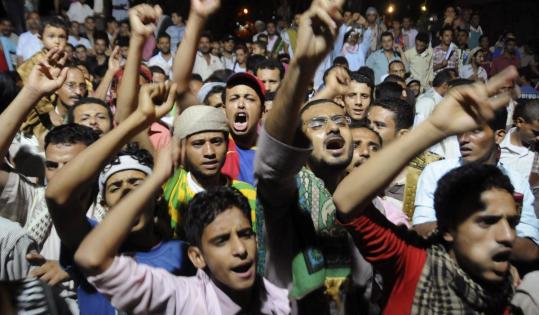 SANA, Yemen - A new wave of fighting erupted in Yemen in a southern provincial capital that has been overrun by extremist militants, killing at least 17 Al Qaeda-linked fighters and three soldiers, a military official said yesterday.

The official said the clashes took place in and around Zinjibar, the capital of Abyan province. The city, along with several southern towns, has been overrun by Al Qaeda-linked militants in the past two months of ongoing political turmoil in Yemen.

The United States and neighboring Saudi Arabia are particularly concerned about Al Qaeda in the Arabian Peninsula, which is the terror group’s most active branch.

Al Qaeda-linked militants quickly overtook towns in Abyan and its capital Zinjibar shortly after the June departure of longtime leader Ali Abdullah Saleh to Saudi Arabia. Saleh left for medical treatment after an attack on his palace.

Government forces have been trying to dislodge the Islamic militants from areas in the south, but they have only made modest headway after weeks of fighting and airstrikes.

The military official, who spoke on condition of anonymity, said 14 militants were killed in gun battles with security after an ambush on two military outposts in the area of Dufas, close to Zinjibar. Three soldiers were killed in those clashes, the official said.

Three more militants were killed in a military airstrike in the same area, the official said.

Yemen has been rocked by political upheaval since massive demonstrations began in February, demanding Saleh step down after 33 years in power. The Yemeni president has clung to power even after several of his closest aides and top military commanders abandoned him to side with protesters.

In separate fighting, troops from the elite Republican Guards clashed with a defecting army unit north of Sana, a military official from the defecting unit said. Two defecting soldiers were killed in the first clashes of their kind since Saleh left to Saudi Arabia.

The defecting unit, led by one of Saleh’s former aides, has been in control of the northern part of the capital. The clashes apparently erupted when the Republican Guards attempted to gain new ground, the official said.

The 42 proposed changes to the nearly 60-year-old constitution would still allow Abdullah to retain most of his absolute powers, according to a 15-page document distributed by the royal palace.

Protesters have been taking to the streets in Jordan for seven months to press the government to expand Parliament’s powers. Jordanians are also demanding lower food prices, a greater say in politics, an end to government corruption, and the election of a prime minister.

The committee’s recommended changes do not address protesters’ demands to elect a prime minister, instead keeping the appointment of the post solely with the king.

The charge is one of the most serious levied against activists, who have played a key role in mobilizing hundreds of thousands of Egyptians to the protests that forced President Hosni Mubarak to step down 18 days later. It is also the strongest indication that the country’s military rulers for the past six months may be running out of patience with criticism.

Lawyer Ali Atef said the case of Asmaa Mahfouz, one of the faces of Egypt’s revolution, was “a warning’’ to other activists against criticizing the military.

Mahfouz was released yesterday on $3,400 bail after more than four hours of interrogation. Atef said activists collected money to pay the bail.