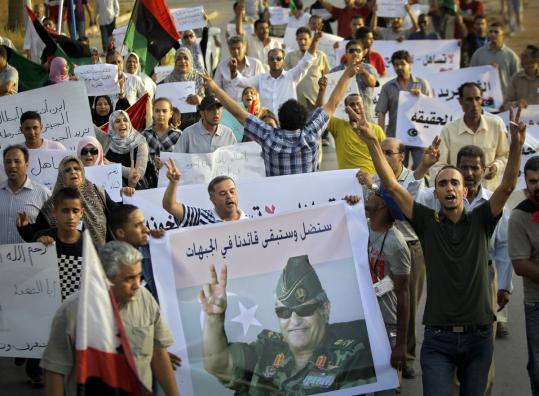 BENGHAZI, Libya - Libyan rebel leaders said yesterday that their forces hunted down and clashed with supporters of Moammar Khadafy who had been posing as rebel fighters to infiltrate the opposition’s eastern stronghold. The overnight battle killed four from each side and added to a sense of crisis within the rebel movement.

Libya’s shaken rebels are trying to rid their ranks of enemies after the assassination last week of their military chief, Abdel-Fattah Younis. The leadership insists the slaying was the work of Khadafy’s regime, but several witnesses have said Younis was killed by fellow rebels.

As officials pieced together events leading up to yesterday’s gun battle, they announced that a faction of fighters called al-Nidaa was made up of Khadafy loyalists posing as rebels. The revelation could raise questions about the loyalty of other rebel factions and sap the movement of much-needed unity in its push to topple Khadafy nearly six months after the revolt began.

Suspicions about al-Nidaa were confirmed, a rebel security leader said, when intelligence officials determined the group was behind two prison breaks on Friday in the rebels’ de facto capital of Benghazi. The prison breaks freed 200 to 300 inmates, including pro-Khadafy mercenaries, fighters, and other regime loyalists.

“These people took advantage of the chaos that resulted from the killing of Younis and entered and attacked the military prison and the [civilian] Kuwaitiya prison,’’ said the rebel’s deputy interior minister, Mustafa al-Sagezli.

Yesterday before dawn, rebel forces tracked al-Nidaa members to a factory where they were hiding out and sent in negotiators to try to persuade them to surrender. When they refused, the rebel units besieged the factory, killing four of the rebels, said Mahmoud Shammam, rebel information minister.

A battlefield commander who participated in the operation, Ismail Salabi, said four of those posing as rebels were also killed and 25 were captured. He described them as Libyans from the southern part of the country who belonged to the Khadafy Brigades.

Rebel forces also seized 40 of the freed prisoners, who were found hiding out with the fighters.

Talk of a fifth column - a group secretly sympathetic to the enemy - adds to the disarray that was set off with Thursday’s killing of the chief rebel commander, Younis, in still mysterious circumstances.

The leadership says authorities had arrested him on suspicion of mismanaging forces under his command, and that gunmen attacked while he was being taken from one location to another under heavy guard.

Several rebels who witnessed the attack, however, said he was killed by his own side. Younis was Khadafy’s interior minister before defecting to join the rebels.

In the Nafusa mountains of western Libya near the Tunisian border, rebel forces said they were making gains in their push against Khadafy forces. Yesterday, they said they were in the town of Hawamid and advanced another 6 to 9 miles toward the small town of Tiji in the last 24 hours. Pro-Khadafy forces inside Tiji were under siege but continued to attack the advancing rebels with rockets, according to Motawa. Tiji is on the main road from the Tunisian border to Tripoli, the Libyan capital. It is considered a strategically important town if rebels are to continue their advance to Tripoli, about 150 miles to the northeast.

Fighting in the east has been stalled for months, with neither side able to make any significant progress.

President Ali Abdullah Saleh called yesterday for an end to months of street protests seeking his ouster and dialogue during the holy month of Ramadan.

In a statement published by the state news agency, Saleh said taking up arms and disrupting people’s daily lives won’t bring about change. He released the statement from the Saudi hospital where he is being treated for wounds from an attack on the presidential compound in June.

Yemen is reeling from nearly six months of protests, as activists call for Saleh to step down after 33 years in power. Security has unraveled since the uprising.

Hosni Mubarak will receive a speedy trial with all hearings broadcast live on state television, the judge who will try the ousted leader pledged yesterday. The trial is scheduled to begin Wednesday in the country’s national police academy in a Cairo suburb.

Mubarak, his security chief Habib el-Adly, and six top police officers face possible death sentences if found guilty on charges they ordered the use of lethal force against protesters during Egypt’s 18-day uprising.