Heavy rains add to misery of famine refugees in Somalia 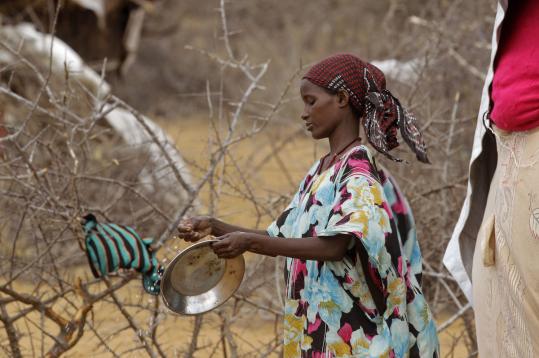 The drought and the famine it has caused in Somalia have affected more than 11.5 million. (Schalk Van Zuydam/ Associated Press)
Associated Press / August 1, 2011

MOGADISHU, Somalia - Tens of thousands of famine-stricken Somali refugees were cold and drenched after torrential rains pounded their makeshift structures in the capital, as the UN raised concerns yesterday that renewed conflict in the country may jeopardize relief work.

Rains are needed to plant crops and alleviate the drought that has lead to famine in Somalia, but the downpour added to the misery of many refugees who live in structures made of sticks, flattened milk cans, and pieces of cloth.

Disgruntled refugees in several camps in Mogadishu said that more aid is needed. “We left our homes, lost our animals and farms, so we ask everyone to help us to survive,’’ Abdi Muse Abshir said.

Lul Hussein, a mother of five, said her family had a sleepless night after their makeshift home crumbled. “We are starved, and we don’t have enough help,’’ she said.

Aid agencies have limited reach in Somalia, where Islamist militants are waging an insurgency against the country’s weak, UN-backed government.

The most dangerous group among the militants - the Al Qaeda-linked Al Shabab- has barred major relief organizations from operating in the territories it controls.

The UN fears tens of thousands already have died in Somalia in areas held by the Islamist rebels because food aid could not reach them.

The African Union peacekeeping force anticipates that Al Shabab may try to attack the camps that now house tens of thousands of famine refugees in Mogadishu, disrupting even further the distribution of food aid. .

The drought and the famine it has caused in Somalia have affected more than 11.5 million people in the Horn of Africa and created a triangle of hunger where the borders of Ethiopia, Kenya, and Somalia meet.