UN races to get food to Somali refugees 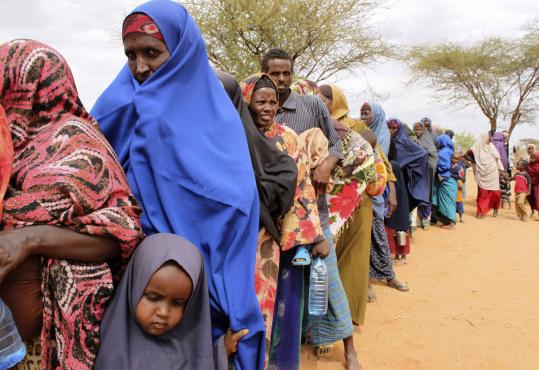 DOLO, Somalia - The UN will airlift emergency rations this week to parts of drought-ravaged Somalia that militants banned it from more than two years ago - a crisis intervention to keep hungry refugees from dying along what an official called the “roads of death.’’

The foray into the famine zone is a desperate attempt to reach at least 175,000 of the 2.2 million Somalis whom aid workers have not been able to help.

Tens of thousands have trekked to neighboring Kenya and Ethiopia, hoping to get aid in refugee camps.

Some - like Isaac Bulle and his family - have nearly nothing left.

“I hope we can cross to Ethiopia, but if we can get help here, we will stay here,’’ said Bulle, who traveled with his two wives and 14 children for 25 days by donkey cart to reach this border town. “Our aim is just to get food. Not to leave the country.’’

Restarting the aid effort is a huge challenge for the World Food Program, whose workers were previously banned from the region by the Al Qaeda-linked militant group Al Shabab. Fourteen program employees have been killed in Somalia since 2008. New land mines have severed a key road to Dolo. A landing strip has fallen into disrepair. Old employees must be found and rehired.

The new feeding efforts in the four districts of southern Somalia near the border with Kenya and Ethiopia are expected to begin by Thursday, slowing the flow of tens of thousands of people who have fled their homes in hope of reaching aid.

The UN said two regions of Somalia are suffering from famine and that 11 million people are in need of aid. But as of Aug. 1, the UN is set to declare all of southern Somalia - including Dolo - a famine zone.

In Rome, the UN Food and Agriculture Organization said a coordination conference would be held tomorrow in Kenya.

The UN is pressing its efforts to gather $1.6 billion in aid in the next 12 months, with $300 million of that coming in the next three months.

Ertharin Cousin, the US ambassador to the UN’s Rome-based food agencies, told reporters she didn’t immediately know if the United States would boost its contribution on top of what it has given.

Last week, the US pledged an additional $28 million in aid for the drought crisis on top of more than $431 million in emergency assistance to the Horn of Africa this year.

New aid will reach Dolo this week. The program is sending 5 tons of high energy bars by emergency airlift Thursday. More food will follow by land.

The program halted its operation in southern Somalia in January 2009 after Al Shabab forced it out.

After the militants were driven out of some areas in an offensive this year by the African Union force - with an assist from allied militias and Ethiopian troops - the front line has moved back far enough that the program can reenter.

It hopes to set up 70 distribution points in four districts - that is, if the local authorities who have given permission to the program to enter don’t change their minds.

The program’s executive director, Josette Sheeran, visited hunger zones in Somalia and Kenya in the last week. She recounted how refugee mothers told her they had to leave children behind to die on the road because they were too weak to walk farther, underscoring how urgently aid is needed inside militant-controlled areas.

“We feel an imperative to try to get closer however we can. Humanitarian aid at scale cannot get into hard-core areas of [militant] control, but you build up the ability for people to come out in different directions and get the aid they need,’’ she said.

But if the refugees are dying before they can reach the food, “this is a new dimension to the problem. . . . These are becoming roads of death,’’ Sheeran said.

Yves Van Loo, the International Committee of the Red Cross spokesman for the Somali delegation, said his group has not had trouble distributing aid because it highlights its neutrality when it seeks permission to enter a region.

Program officials, though, admit the difficulties they face in Somalia and say some corruption of food aid could take place. Stefano Poretti, the Somalia country director for the food program, said there are enough controls in place to ensure it “will reduce the risk of misuse.’’

Australian Foreign Minister Kevin Rudd, who traveled to Dolo on Sunday with Sheeran, said the move into the wilds of Somalia “will not be a perfect humanitarian operation.’’

But he added that the images of children slowly deteriorating are requiring world governments to act now.

Al Shabab indicated early this month it would let banned aid agencies back, but changed course last week and even denied that a famine is taking place.