Olympic boxer among wounded as Syrian forces sweep into cities 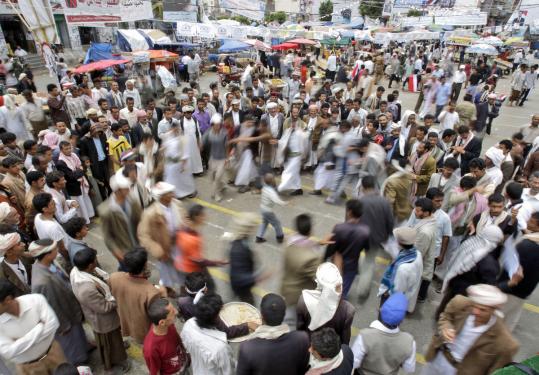 Nasser al-Shami, who won a bronze medal in the 2004 Olympics in Athens, was in stable condition after being hit by shotgun pellets in the city of Hama, said Rami Abdul-Rahman, the London-based director of the Syrian Observatory for Human Rights. Abdul-Rahman said he spoke to the doctor who treated the athlete.

The shooting happened as Syrian troops and tanks sealed off Hama and blocked the roads leading in, an apparent attempt to crush growing dissent there and retake the city one month after security forces withdrew. About 300,000 protesters held huge protests against the regime in Hama last week, a sign the city was spiraling out of government control.

“There is some kind of a siege on the city. They are closing all roads leading to Hama,’’ said Mustafa Osso, a Syria-based rights activist.

Hama, which has a history of militancy against the Assad regime, was targeted in a major government crackdown nearly three decades ago. In 1982, Assad’s late father and predecessor, Hafez Assad, ordered his troops to crush a rebellion by Sunni fundamentalists, killing between 10,000 and 25,000 people, rights groups say.

Omar Idilbi, a spokesman for the Local Coordination Committees, which track the protests in Syria, said the shots were fired in Idlib province, near the Turkish border.

About 60 people made it across, but authorities detained several others, he said, citing witnesses on the ground.

Thousands of Syrians have already taken shelter in refugee camps in Turkey, a source of deep embarrassment to Damascus.

A court yesterday convicted the former Tunisian president of smuggling drugs, guns, and archeological artifacts and sentenced him to 15 1/2 years in prison in the latest trial in absentia of the deposed autocrat.

Former president Zine El Abidine Ben Ali will also be fined $72,000. The verdict follows a trial two weeks ago in which he and his wife each received sentences of 35 years in prison and $64 million in fines for embezzlement and other charges. Authorities say another 91 charges remain just for the civil courts.

Ben Ali ruled Tunisia with an iron hand for more than two decades before fleeing to Saudi Arabia on Jan. 14, after a monthlong popular uprising that heralded the start of a wave of protests for greater freedoms across the Middle East.

Saudi Arabia has declined to answer Tunisia’s request to extradite the former president.

Hundreds of Egyptians attacked a courtroom in Cairo on yesterday, scuffled with security guards, and blocked a highway for hours after the court ordered the release of 10 police officers charged with killing protesters during the country’s uprising.

Nearly five months later, only one officer has been convicted in the deaths of more than 846 people killed in a government crackdown on protesters.

In yesterday’s court proceedings, the judge seemed to suggest, in his initial statement, that he would impose harsh sentences. However, he then ordered the release of the defendants, setting off a riot.