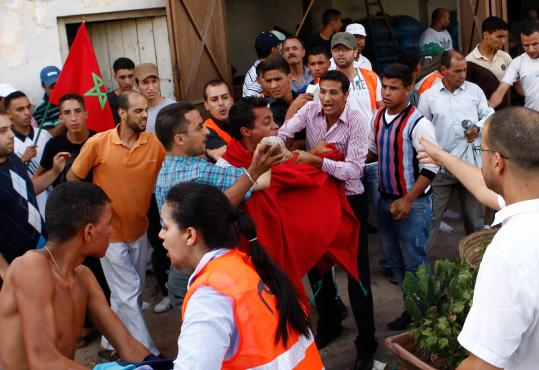 BENGHAZI, Libya - Turkey’s foreign minister recognized Libya’s rebel leaders as the country’s legitimate representatives and promised them an additional $200 million in aid during a visit yesterday.

The visit by Foreign Minister Ahmet Davutoglu signaled a further policy shift for Ankara, Turkey. The nation, a key regional power, had initially balked at the idea of military action in Libya, but as a NATO member is now supporting the alliance’s air strikes there.

Turkish companies were involved in construction projects worth billions of dollars in Libya before the outbreak of a Libyan antigovernment uprising in February that has evolved into a protracted armed conflict.

Davutoglu met with Mustafa Abdul-Jalil, chairman of the rebels’ National Transitional Council, in a heavily guarded government building in the city of Benghazi, the rebel’s main stronghold in eastern Libya. He later addressed a news conference with Ali al-Essawi, who serves as the rebels’ foreign minister.

The Turkish visitor said his country recognizes the rebel leaders as the legitimate representatives of the Libyan people. Several other countries, including France, Qatar, and Italy, have previously recognized the rebels.

Essawi noted that “Turkey has given us political as well as financial support and humanitarian aid.’’

Turkey has already granted the Libyan opposition $100 million in aid and promised an additional $200 million. Some of the money is to be used to improve the infrastructure of Benghazi and rehabilitate its airport.

Davutoglu’s trip to Benghazi yesterday is the most powerful signal that Turkey, which has vast trade interests in Libya, is throwing its weight behind the Libyan opposition despite its long-time relations with Libyan leader Moammar Khadafy.

The foreign minister said he hopes the Libya crisis can be solved peacefully this month. Turkey has called on Khadafy to withdraw from power and pave the way for “democracy and transparency.’’

Syrian forces carried out arrests yesterday in the western city of Hama, an opposition stronghold, amid the sound of heavy gunfire, an antigovernment activist said.

The arrests came two days after some 300,000 protesters gathered in Hama in the largest demonstration yet in a three-month-old uprising against President Bashar Assad.

Yesterday’s arrests took place near Hama’s sports stadium, said Lebanon-based Syrian activist Rami Nakhleh, who coordinates information from a loose network of activists in Syria. Nakhleh said he knew of five arrests so far, but he believes more were taken into custody.

Thousands of prodemocracy activists in Morocco demonstrated across the country yesterday, two days after the king’s new constitution was overwhelmingly approved in a referendum.

The February 20 democracy movement, whose demonstrations over the past few months prompted King Mohammed VI to initiate his own reforms, showed it could still bring thousands into the streets.

The movement, which is calling for a parliamentary monarchy, has rejected the amended constitution, saying it still leaves most powers in the king’s hands and does little to address society’s problems.

At least 2,000 people marched through downtown Rabat chanting slogans decrying corruption and the new constitution. Pockets of government supporters could be seen in the streets near the demonstration, but police kept the two groups separated.

But in Morocco’s largest city, Casablanca, the two groups clashed, with supporters of the king hurling stones and chasing democracy . There were also demonstrations in Tangiers and Marrakech.