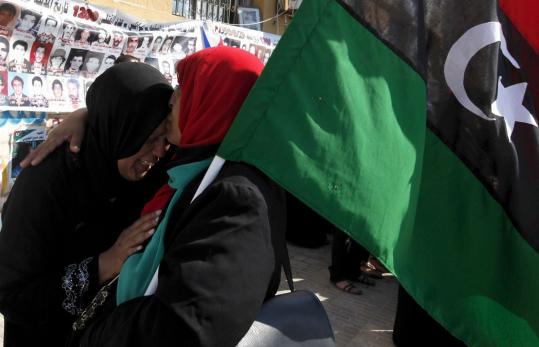 NEW YORK — Judges from the International Criminal Court issued a warrant yesterday for the arrest of Libyan leader Moammar Khadafy, his son, and a top military intelligence chief, calling for them to stand trial for crimes against humanity in connection with a violent crackdown on antigovernment protesters.

The three-judge pretrial chamber ruled that ICC Prosecutor Luis Moreno-Ocampo had established “reasonable grounds’’ to charge Khadafy, his son Seif al-Islam Khadafy, and Abdullah al-Senussi, the chief of military intelligence. They are accused of killing and persecuting hundreds of Libyan civilians since the government began suppressing public protests Feb. 15.

The ruling adds to the mounting international pressure on Khadafy to yield power.

The regime has been the target of daily NATO airstrikes, and alliance officials hope the court’s action will encourage more countries to abandon the Libyan leader. But it could also give Khadafy less incentive to accept a peaceful settlement because he may be unable to arrange an amnesty.

In issuing the ruling, Judge Sanji Monageng of Botswana said there was sufficient evidence to believe that the three Libyans have committed the crimes and that their arrest was necessary to ensure they appear before the Hague-based court and to prevent them from continuing further crimes.

She said the court’s registrar would seek the cooperation of Libya and other governments in securing the three men’s surrender.

“This decision once again highlights the increasing isolation of the Khadafy regime,’’ said NATO Secretary General Anders Fogh Rasmussen. “It reinforces the reason for NATO’s mission to protect the Libyan people from Khadafy’s forces.’’

“Khadafy and his henchmen need to realize that time is rapidly running out for them,’’ Rasmussen said. “NATO is more determined than ever to keep up the pressure until all attacks on civilians have ended, until all regime forces have returned to their bases, and until there is unhindered access to humanitarian aid for all those who need it.’’

Libyan officials did not immediately react to the issuance of the warrant, but the regime has long said it does not recognize the legitimacy of the court.

“All of its activities are directed at African leaders,’’ government spokesman Moussa Ibrahim said Sunday. “Is it really trying to protect the people from war crimes? Or is it just conducting a hidden agenda for the West?’’

It remains highly unlikely that Khadafy’s own government would surrender him or his inner circle.

The decision to charge the Libyan leader has sparked a debate among scholars, military officers, and government officials over the role of such a politically sensitive prosecution in the midst of an armed conflict. Some officials fear it will complicate efforts to get Khadafy to step down; others maintain that the charge will send a powerful message to other dictators to not use lethal force against civilians.

Scores of Khadafy’s top advisers and diplomats have defected from the government since NATO began an air campaign aimed at protecting civilians and forcing Khadafy from power. But the Libyan leader has shown remarkable staying power, surviving an onslaught of bombing strikes, one of which resulted in the death of one of his sons.

Much of the evidence of Khadafy’s intent to violently repress the demonstrations rests on his own public statements.

On Feb. 22, in a speech on state television, Khadafy described the protesters as “garbage’’ and “rats’’ and threatened to “clean Libya inch by inch, house by house, small street by small street, individual by individual, corner by corner, until the country is clear from all garbage and dirt.’’

The prosecutor charged Khadafy’s son with playing an active role in recruiting foreign mercenaries who were placed under the command of the Libyan security services and ordered to attack suspected dissidents and protesters.

The prosecutor cited Senussi for his alleged role in leading a crackdown on opposition figures and demonstrators in the restive city of Benghazi, which has emerged as the capital of resistance to Khadafy’s rule. He charged that Senussi, acting on Khadafy’s request, “expressly ordered the shooting at civilians’’ in Benghazi.

Yesterday’s ICC ruling marks only the second time that the ICC has sought the arrest of a sitting head of state.

In 2005, the court issued an arrest warrant against Sudanese leader Omar Hassan al-Bashir, who stands accused of orchestrating a genocidal campaign against civilians in Darfur. The court has been unable to arrest Bashir, who is preparing for a visit to Beijing.

Libya is not a signatory to the treaty, known as the Rome Statute, that established the ICC, and is subject to the court’s jurisdiction only if the United Nations Security Council authorizes it.

In a sign of Khadafy’s isolation, staunch opponents of the ICC, including China and Russia, voted to approve the ICC investigation of his actions.

The Feb. 26 adoption of UN Security Council Resolution 1970, which approved the ICC prosecution in Libya, marked the first time that the United States had voted in favor of a measure empowering the International Criminal Court.

President Obama’s administration has previously encouraged the court to pursue cases that are consistent with US interests.