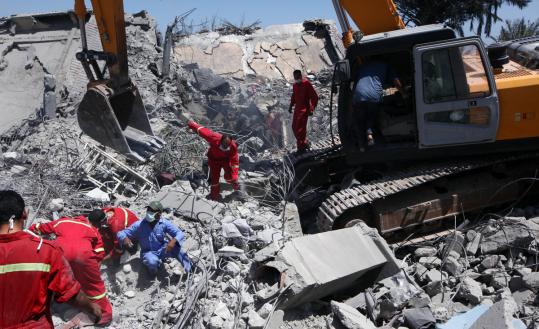 Foreign journalists were taken by government officials to the compound in Surman, where rescue teams yesterday inspected the two buildings that had been blasted to rubble. (Mahmud Turkia/ AFP/ Getty Images)
By Adam Schreck Associated Press / June 21, 2011

Khadafy’s regime has repeatedly accused the alliance of targeting civilians, an attempt to rally support against international intervention into Libya’s civil war. The alliance insists it tries to avoid killing civilians.

NATO released a statement saying it conducted a “precision strike’’ near the town “on a legitimate military target — a command and control node which was directly involved in coordinating systematic attacks’’ on Libyan citizens.

The commander of NATO’s Libya operation, Lieutenant General Charles Bouchard, said the “strike will greatly degrade the Khadafy regime’s forces’ ability to carry out their barbaric assaults on the Libyan people.’’

NATO officials have repeatedly said the alliance does not target individuals. It could not confirm reports of casualties in the strike but said it regrets any loss of civilian life.

Hamidi is a longtime regime insider who took part in the 1969 coup that brought Khadafy to power. He reportedly commanded a battalion that crushed rebels in the nearby western city of Zawiya in March, and his daughter is married to one of Khadafy’s sons, Saadi.

Ibrahim said Hamidi escaped the airstrikes unharmed but that three children, two of them Hamidi’s grandchildren, were among the 15 killed. Officials said he was inside a still-intact building at the time of the strike.

“They are targeting civilians. . . . The logic is intimidation,’’ Ibrahim said of NATO. “They want Libyans to give up the fight . . . they want to break our spirit.’’

Foreign journalists based in the Libyan capital were taken by government officials to the walled compound, where at least two buildings had been blasted to rubble. A pair of massive craters could be seen in the dusty ground, and rescue workers with dogs were scouring the rubble in search of people. The smell of smoke was still in the air.

Bombs also appeared to have ripped holes through the top of a large tent sheltering cars, smashing the floor and mangling vehicles inside. The windows were shattered in a circular sitting room containing old framed photos said to be of Hamidi, and a deer kept in an enclosure with other animals had a broken antler and was bleeding from the mouth.

While there were no signs of heavy weapons at the site, armed guards in military-style uniforms patrolled the grounds as numerous security cameras watched over the sprawling complex. Hundreds of cases of bottled water, cooking oil, pasta, and other supplies were stockpiled in one of the destroyed buildings.

Another building outside the compound, next to a communications tower, was also flattened, and walls were blown out of an adjacent house. A mosque across the street and a school next door were not damaged.

Journalists were later taken to a hospital in the nearby city of Sabratha, where medical workers showed them the bodies of about eight to 10 people, including at least two children, said to have been killed in the strike.

NATO, which has a mandate to protect Libyan civilians, has rejected government allegations that it targets civilians. However, mistakes have occurred.

On March 19, a coalition including France, Britain, and the United States launched the first strikes against Khadafy’s forces under a United Nations resolution to protect civilians. NATO, which is joined by a number of Arab allies, assumed control of the air campaign over Libya on March 31.

From their de facto capital of Benghazi, the rebels have taken over much of the eastern half of the country. They also control pockets in the west.