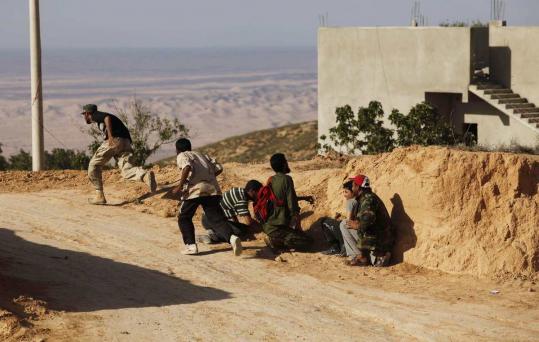 Rebel fighters in Libya took cover during clashes outside the city of Riyayna, southwest of Tripoli, yesterday. If the rebels take Zlitan, they would be within 85 miles of Tripoli. (Youssef Boudlal/ Reuters)
By Adam Schreck and Hadeel Al-Shalchi Associated Press / June 15, 2011

TRIPOLI, Libya — NATO resumed its airstrikes on the Libyan capital of Tripoli late yesterday, blasting at least two targets just before midnight, after military leaders voiced concerns about sustaining the operations if the alliance mission drags on.

The targets of the late-night airstrikes were not immediately clear, and there was no word about casualties.

East of the capital, alliance aircraft have begun dropping leaflets warning government troops to abandon their posts outside Zlitan, which is west of the rebel-held port city of Misurata.

Rebel forces have been advancing along the Mediterranean coast toward Zlitan but say they have been instructed by NATO to withdraw ahead of expected bombing runs.

The leaflets intended for forces loyal to Khadafy carry the NATO symbol and a picture of an Apache attack helicopter and burning tanks on one side. Arabic writing warns: “There’s no place to hide. It’s not too late to stop fighting. If you continue to threaten civilians, you will face destruction.’’ The message on the reverse urges soldiers to “stop and stay away from fighting now.’’

A reporter near the front line said NATO fighter jets could be heard overhead.

If the rebels take Zlitan, they would be within 85 miles of the eastern outskirts of Tripoli. A rebel official said opposition leaders in Zlitan have been meeting with their counterparts in Misurata, but he acknowledged they face challenges in advancing on the city.

“We need the people of Zlitan to push more courageously forward. They are dependent on our movements, but the problem is only a third of that city is with the rebels,’’ said Ibrahim Beatelmal, a rebel military spokesman in Misurata.

On Monday, NATO said attack helicopters struck two of Khadafy’s military boats off Misurata, as well as military vehicles and equipment concealed beneath trees in Zlitan.

NATO’s nearly three-month air campaign has grounded Khadafy’s air forces and weakened his military capabilities. But there are signs the pace of operations has strained the trans-Atlantic alliance.

In London, the head of the Royal Navy warned that the British fleet — a key contributor to the Libya mission — will be unable to maintain the pace of operations if the mission drags on until the end of the year.

Admiral Mark Stanhope told reporters Monday he was comfortable with NATO’s decision to extend the Libya operation to the end of September but said beyond that the government would need to make “challenging decisions.’’

“If we do it longer than six months we will have to reprioritize forces,’’ he said.

“If additional resources are needed, this of course will need a political decision,’’ said the official, General Stephane Abrial, supreme allied commander transformation.

Defense Secretary Robert Gates last week publicly rebuked the United States’ European allies and said NATO’s operations in Libya have exposed the alliance’s shortcomings. France and Britain have carried most of the load since NATO began the Libya mission March 31.

In western Libya, Khadafy’s troops were bombarding opposition forces controlling a key border crossing with Tunisia, according to Omar Hussein, a spokesman for rebels in the western Nafusa mountains.

He said government forces were targeting rebels holding the road that leads toward the Dehiba border crossing. Dehiba is a key supply point for the rebels, who wrested control of a string of Nafusa mountain towns from Khadafy’s forces this month.

Canada yesterday joined a growing list of countries to recognize the Libyan rebels as the legitimate government of the country.