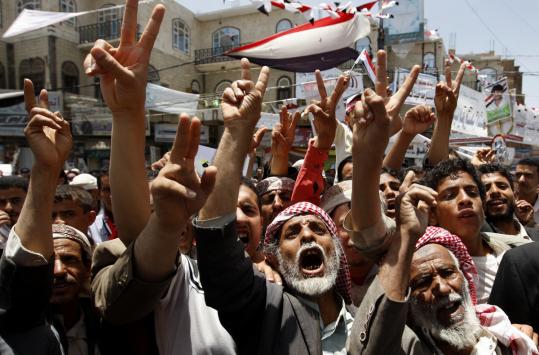 SANA, Yemen — Yemeni forces opened fire on a protest camp and killed more than 20 demonstrators yesterday in the southern city of Taiz while government warplanes launched air strikes on another southern town seized by radical Islamists.

The new attempts to suppress the uprising against President Ali Abdullah Saleh with overwhelming force, after a weekend when high-level military defectors formed a united front in support of the protesters, all pointed to the longtime leader’s increasingly tenuous grip on power.

Early today, residents said multiple explosions were heard in several parts of Sana, apparently from heavy weapons and shells. They said clashes were in progress in the capital. There were no immediate details of who was fighting or whether there were casualties.

Saleh has raised the specter of an Islamist takeover of Yemen to solicit international funds and rebuff calls that he stand down.

The strikes were the government’s hardest hit yet against the Islamists since hundreds of them streamed in Friday, seizing banks and government buildings.

Moammar Khadafy is ready for a truce to stop the fighting in his country, South Africa’s president said yesterday after meeting the Libyan ruler, but he listed familiar Khadafy conditions that have scuttled previous cease-fire efforts. Rebels quickly rejected the offer.

President Jacob Zuma said Khadafy is ready to accept an African Union initiative for a cease-fire that would stop all hostilities, including NATO airstrikes in support of rebel forces. “He is ready to implement the road map,’’ Zuma said.

Zuma said Khadafy insists that “all Libyans be given a chance to talk among themselves’’ to determine the country’s future. He did not say Khadafy is ready to step down, which is the rebels’ central demand.

In Benghazi, the de facto rebel capital, rebel Foreign Minister Fathi Baja, rejected the African Union plan. “It is only some stuff that Khadafy wants to announce to stay in power,’’ he said.

A prominent Egyptian activist was summoned yesterday for questioning by the country’s military rulers over comments criticizing their human rights record.

Hossam el-Hamalawy, 33, said he was ordered to appear before military prosecutors today after he accused the head of the military police of abuses against activists in an interview on a popular TV program.

Critics say the military, which has been managing the transitional period following the ouster of President Hosni Mubarak on Feb. 11, has been slow in introducing changes to uproot former regime officials and has often put civilians on military trial.