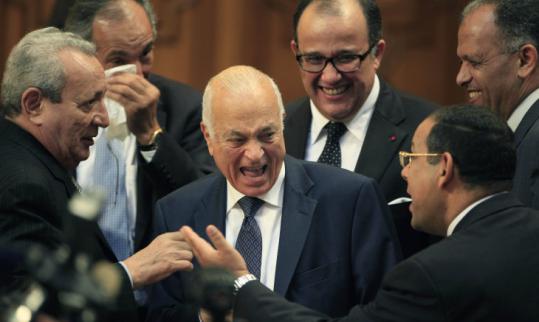 Nabil Elaraby of Egypt (center) was chosen as head of the Arab League yesterday after he replaced a divisive candidate. (Amr Nabil/ Associated Press)
Associated Press / May 16, 2011

CAIRO — The Arab League chose a new chief yesterday, after Egypt switched candidates at the last minute to avert a divisive vote for a post that is usually determined by consensus.

The 22-member Arab organization endorsed Egypt’s current foreign minister, Nabil Elaraby, to replace Amr Moussa, who is stepping down to run for president of Egypt. Moussa, 74, held the Arab League post for a decade.

The Arab League secretary-general’s post has traditionally been held by Egypt, home of the League’s headquarters. But this year, Egypt and Qatar both put candidates forward.

Egypt has struggled to keep the post, seeing it as symbolic in its bid to maintain its position as a leading Arab nation.

Egypt had nominated a member of deposed President Hosni Mubarak’s party, an unpopular choice. In an 11th-hour change, it substituted Elaraby, 76, a popular diplomat who backed the uprising that ousted Mubarak’s regime. Elaraby has had an international career and has earned respect among the Arab countries.

After the change was announced, Qatar withdrew its candidate, giving the job to Elaraby.

“We had agreement in appreciation of Egypt and the revolution of Jan. 25, [so] Qatar withdrew its candidate,’’ he told the Arab League meeting. “This is the right choice, which encouraged us to support it.’’