US delivers food, medicine to opposition 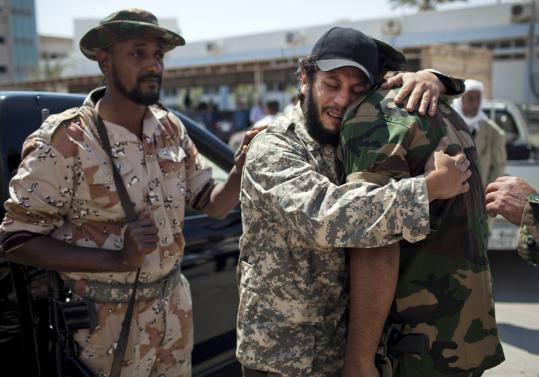 TRIPOLI, Libya — In a one-two punch against Moammar Khadafy’s forces, NATO warplanes struck a command center in the capital, Tripoli, yesterday after pounding regime targets around the besieged port of Misurata. Rebels hoped the stepped-up attacks could help extend some of their biggest advances to date, including a major outward push from Misurata.

The opposition also said it made gains along a long-deadlocked front near the eastern town of Ajdabiya.

The rebels’ military spokesman, Colonel Ahmed Bani, said opposition forces had pushed Khadafy’s troops out of rocket range on the west side of Misurata and dislodged them from the airport after two days of battles, raising the prospect that the siege could be broken.

Bani said rebels from Misurata and Zlitan, 35 miles west, had joined up to fight in close-range combat that rendered the regime forces’ long-range rockets useless. Speaking in the rebel headquarters city of Benghazi, Bani said Khadafy’s brigades were pushed about 10 miles back from Misurata’s airport.

“The picture is looking good for us,’’ he said.

In another boost to the opposition, the US State Department said the first load of non-lethal American military aid for the rebels landed yesterday at the port in their headquarters city, Benghazi.

Spokesman Mark Toner said the shipment consisted of more than 10,000 meals, with further shipments of medical supplies, boots, and protective gear to arrive shortly. The delivery came ahead of planned meetings in Washington this week between US officials and the head of the opposition Transitional National Council.

The Libyan conflict, dating to mid-February, had seemed stalemated for more than a week, with most of the fighting along the border with Tunisia in the far west. The latest airstrikes and overland advances may give the rebels new momentum in their struggle to topple Khadafy.

The rebels control most of eastern Libya, and Khadafy most of the west, including Tripoli. Exceptions in the west include pockets of embattled rebel-held towns along the border with Tunisia, and Misurata on the coast.

The NATO planes struck what the alliance called a command and control facility in downtown Tripoli early yesterday, according to Brigadier General Claudio Gabellini of Italy.

“All NATO targets are military targets,’’ said Gabellini, who serves on NATO’s planning staff at the headquarters in Naples.

He denied that NATO was targeting Khadafy, saying: “We have no evidence about what Mr. Khadafy is doing right now, and to tell you the truth we’re not really interested.’’

Gabellini also said 30 regime military targets have been hit since May 2 around Misurata, which has been under siege by Khadafy’s forces for two months. The targets included 12 tanks, three self-propelled guns, three multiple-rocket-launchers, and various vehicles, Gabellini said.

“Although it’s a real challenge for us to strike military targets in and around population centers like Misurata, while minimizing the risks to innocent civilians, we have been working hard to prevent attacks by pro-Khadafy forces,’’ Gabellini said.

The rebels posted video clips calling on Khadafy’s forces in the Misurata area to surrender.

“We are after you, Khadafy,’’ one of the fighters in the video said.

“They are doing their jobs very, very well,’’ he said. “We will need these airstrikes when we are planning to advance on the ground.’’

Still, he said the rebels needed the world to respond to their pleas for heavy weaponry before they can make a final push against Khadafy’s more heavily armed forces.