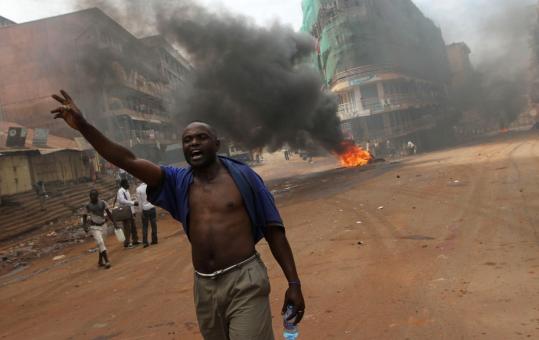 KAMPALA, Uganda — Army troops and police fired at rioting demonstrators yesterday, and at least two people were killed and 120 wounded in the largest antigovernment protest in sub-Saharan Africa this year.

Rioters burned tires in downtown streets as security forces fired guns and tear gas. A Red Cross spokeswoman said 15 of the wounded had been hit by live bullets. Battles between protesters and police were also reported elsewhere around the country.

The protests are the first serious demonstrations in sub-Saharan Africa since a wave of antigovernment protests swept leaders in Tunisia and Egypt out of power. President Yoweri Museveni of Uganda, who has been in power for a quarter century, has vowed repeatedly that his government will not be taken down by protests.

The breakout of violence came one day after a brutal takedown of the country’s top opposition politician, Kizza Besigye. Police smashed through the window of Besigye’s vehicle with the butt of a gun and doused him with tear gas at close range before bundling him into the back of a pickup truck and speeding off. “They arrested him like a chicken thief,’’ said Brown Ndese, a protester. “We cannot allow such things to continue. Museveni must go.’’

Besigye was freed on bail Thursday but did not make any public appearances or statements yesterday. Radio reports quoted an aide as saying that Besigye was in poor health, and that he was leaving the country for treatment.

Besigye withstood long volleys of tear gas sprayed directly on him Thursday, but it was not clear how sick or injured he was. Attempts to reach his aides for comment failed.

Besigye has held five “walk to work’’ demonstrations to protest rising prices and what he calls a corrupt government.