Senators call on US to do more to help Libyan rebels 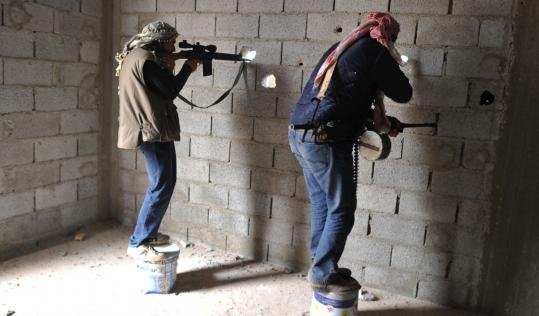 TRIPOLI, Libya — Three members of the Senate Armed Services Committee said yesterday that the United States and its allies are not doing enough to end the stalemate in Libya, where Moammar Khadafy’s forces unleashed a barrage of shells and rockets at Misurata in an especially bloody weekend.

Despite the assault on Misurata, which doctors said killed 32 and wounded dozens in two days, rebels said they drove the last progovernment forces from the center of Libya’s third-largest city. Morale among Khadafy’s troops fighting in Misurata has collapsed, with some abandoning their posts, said one captured Libyan soldier.

The battle for Misurata, which has claimed hundreds of lives in the past two months, has become the focal point of Libya’s armed rebellion against Khadafy since fighting elsewhere is deadlocked.

Video of Misurata civilians being killed and wounded by the government’s heavy weapons, including Grad rockets and tank shells, have spurred calls for more forceful international intervention to stop the bloodshed.

“I really fear a stalemate,’’ said McCain, a Republican from Arizona, who was interviewed in Cairo after visiting the rebel strongholds in Libya. He said it was “very possible’’ that Al Qaeda could come in to take advantage of the stalemate and a politically divided Libya, and the United States should recognize opposition forces as “the legitimate voice’’ of the Libyan people.

In interviews on CNN’s “State of the Union’’ and NBC’s “Meet the Press,’’ McCain said the US military should increase air support for the rebels. He said sufficient air power “could bring Khadafy to his knees.’’

South Carolina Senator Lindsey Graham, another Republican member of the committee, went further in an appearance on the CNN program. Graham said he wants NATO to bomb Khadafy’s inner circle and military headquarters, saying the quickest way to end the stalemate is “to cut the head of the snake off.’’

“I think it gives justification if NATO decides it wants to, for going directly after Khadafy,’’ Lieberman said. “I can’t think of anything that would protect the civilian population of Libya more than the removal of Moammar Khadafy.’’

Senator Scott Brown, a Republican from Massachusetts and a member of the committee, has said he supports the US airstrikes in Libya to enforce the no-fly zone. He could not be immediately reached for comment yesterday on the calls for a greater American role.

Even with more arms for the rebels, Graham said, there is not enough momentum for them to reach Tripoli, the capital. “The way to get Khadafy to leave is have his inner circle break and turn on him. And that’s going to take a sustained effort through an air campaign,’’ he said.

McCain was not as enthusiastic about targeting Khadafy directly, saying, “We have tried those things in the past with other dictators, and it’s a little harder than you think it is.’’ Khadafy is elusive and “a great survivor, and there’s the potential for civilian casualties,’’ which could turn the Libyan people against the United States, he said.

“My emphasis is on winning the battle on the ground, not taking a chance on taking him out with a lucky air strike,’’ McCain said.

The senators said they want increased use of US precision weapons and American air power returned to the mission.

While the coalition’s airstrikes have delivered heavy blows to his army, they have not halted attacks on Misurata.